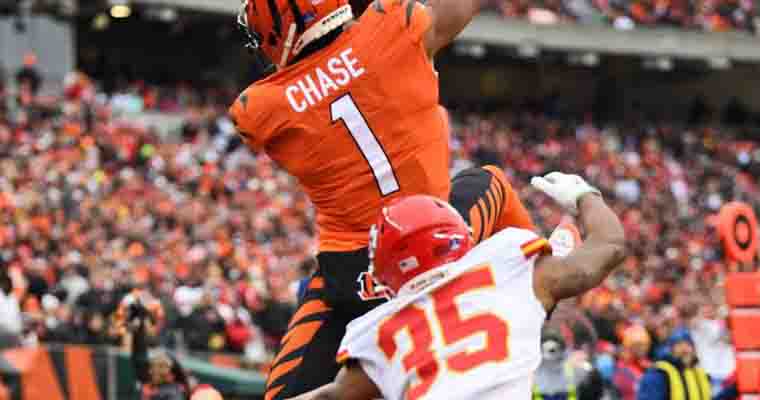 The AFC Championship Game this Sunday features a battle of one team that was expected to be there and another that is way ahead of schedule in regard to establishing their legacy.

The number 2 seed Kansas City Chiefs host the fourth-seeded Cincinnati Bengals at Arrowhead Stadium. Patrick Mahomes and the Chiefs were able to eliminate the Buffalo Bills from the NFL Playoffs last Sunday after a late comeback where an overtime-causing drive was completed with only 13 seconds remaining on the game clock.

The Cincinnati Bengals actually did KC a favor when they defeated the#1 team in the AFC in the Tennessee Titans, as it is the reason that the Chiefs are playing at home instead of on the road in Nashville.

Lines for NFL Playoff betting on the AFC Championship Game have been posted for nearly 72 hours now and the spread has not moved a bit, holding firm at a touchdown advantage for Kansas City.

The over/under and point spread combine to imply a final score of Kansas City 31 – Cincinnati 24, which is a similar margin posted for their Week 17 matchup, but with opposite results.

During the Chief’s 13 second comeback against the Bills on Sunday that sent the game to overtime, Mahomes connected with Hill then Kelce on consecutive plays before kicking the game-tying field goal.

However, Hill and Kelce were mostly contained during their last matchup with the Bengals as Mahomes was forced to spread the ball around to his supporting cast on offense.

Joe Burrow and rookie wide receiver Ja’Marr Chase connected for 266 yards and 3 TDs. The KC secondary had no answer for the QB/WR duo that were also teammates for the National Champion LSU Tigers two years ago, setting a rookie record for most receiving yards in a game.

Still, NFL betting sites don’t forecast a repeat performance from Chase and Burrow, but should they?

Chiefs’ safety Tyrann Mathieu remains unavailable for Sunday due to concussion protocols, and whether he can suit up for the AFC Championship Game will definitely impact the outcome.

For gamblers that have yet to make up their minds about who the 2022 AFC Champion will be, keep a close eye on the injury reports heading into this weekend and factor that into your decisions.

For more insight into how little chance the Bengals are being granted, have a look at the futures odds posted at Super Bowl betting sites that predict the overall SB 56 winners.

The above Super Bowl 56 odds can be taken advantage of now, but will likely be removed from the boards following Sunday’s Conference Championship Round.