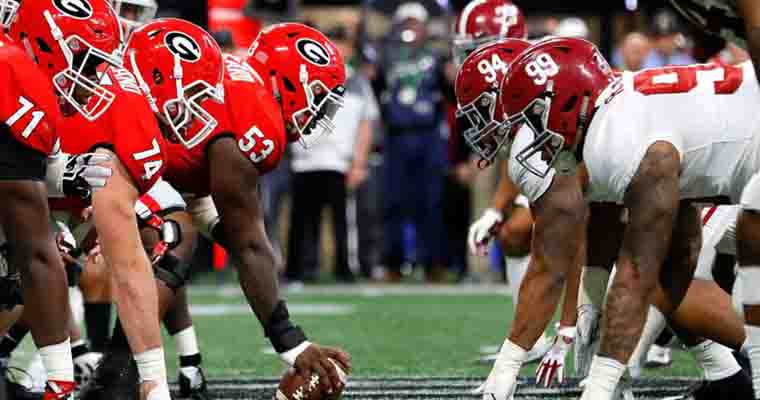 Next Monday night in Indianapolis, two SEC juggernauts will collide for the second time in as many months to determine the 2021-22 NCAA College Football National Champion.

Will it be the underdog Alabama Crimson Tide who are attempting to win back-to-back CFP Championships, or will the Georgia Bulldogs deliver on the college football betting lines that favor them to be the victor by the margin of a field goal.

On December 4th, the Bulldogs entered the SEC Championship Game as invincible favorites but exited with a humiliating loss to the SEC Champion Crimson Tide football team.

College Football betting sites agree that the second time will be different for Kirby Smart and his Bulldogs, as the CFP odds have not budged for several days now following heavy movement in the 48 hours following their debut.

Futures odds for betting on the College Football Playoffs have featured Alabama in the lead since they beat Georgia a month ago, but something in their win over the Cincinnati Bearcats in the Cotton Bowl must have caused bookmakers to think twice in the CFP final.

The Crimson Tide were able to handily defeat the Bearcats by a score of 27-6, but Alabama did struggle to put points on the board early on against Cincinnati, and the game was competitive into the 4th quarter.

The same cannot be said about the Orange Bowl matchup between the Michigan Wolverines and Georgia. The Bulldogs won by a final score of 34-11, with Georgia easily covering the -6.5 point spread offered pregame.

Those that laid action on the +140 futures odds for Georgia at football betting sites prior to last Friday’s CFP semifinals are sitting pretty today, but will the Bulldogs win in their National Championship rematch with Alabama?

Why is Georgia favored at all considering the result of the SEC Title Game?

Alabama has won the last 7 games they’ve played against Georgia, so why do oddsmakers have optimism during a season where they’ve already dropped a game to the Tide?

Much of the success of the Bulldogs will rest on whether or not their defensive line can get pressure on Alabama quarterback Bryce Young. They were unable to lock down the Heisman Trophy-winning QB last go-round, and another repeat performance is likely to result in Nick Saban hoisting his record 7th NCAAF Title.

According to the following CFP prop bet posted at Bovada Sportsbook, scoring first is paramount to winning outright.

However, the Bulldogs were the first to score during their last matchup, posting a field goal in the first quarter of play during the SEC Championship.

Georgia scored the first 10 points during their last matchup with Alabama just prior to the Crimson Tide peeling off 17 and taking a lead into halftime.

When Saban and Alabama are firing on all cylinders, no one can stop them in the realm of college football. They’ve already proven that they can beat Georgia, so beware when laying action on the three-point spread that favors the Bulldogs next Monday night.