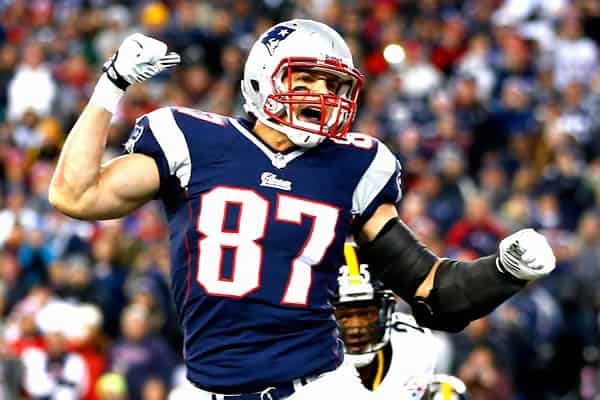 Rob Gronkowski will officially feature in Super Bowl 52. This is great news for the New England Patriots, as Gronk has been QB Tom Brady’s target man all season long. Gronkowski confirmed Thursday that he was cleared by doctors to play after suffering a concussion in the AFC Championship against the Jacksonville Jaguars. Now that he’s available, the Patriots offense will be fully loaded and ready to go on Super Bowl Sunday.

Gronkowski said he was always confident that he would play against the Eagles, but he had to go through the formalities of the NFL’s concussion protocol policies. He followed closely along to the guidance of the team’s medical staff and independent doctors to ensure his spot in the NFL’s biggest game. He participated in the latest practice and says he’s 100% ready to go for Sunday.

Fans were worried when Jags safety Barry Church had a helmet-to-helmet hit on Gronk late in the first half of the AFC Championship. He was able to get up to his feet but looked wobbly heading back to locker room. He did not return to the game and the Patriots were able to muster a comeback win. Church was fined $24,309 for his hit on Gronk. When asked if the hit was dirty, Gronkowski seemed already past the incident and credited it to the conditions of the game.

Gronk was the leading receiver for the Patriots in terms of both receptions and yardage. In the regular season, Gronk led all Pats receivers with 69 receptions, 1,084 yards and 8 touchdowns. With these numbers, he officially declared himself the best TE in the league. With an average of 15.7 yards per carry, Gronk is not only reliable but also effective.

Under Gronkowski, new signing WR Brandin Cooks was the leading receiver with 65 catches, 1,082 yards and 7 touchdowns. As you can see, the competition for leading receiver was close, which is more a testament to the Pats’ depth. Danny Amendola held the third spot with 61 catches, 659 yards and 2 touchdowns. In the postseason, Amendola has been the top receiver. If it weren’t for him, the Patriots would likely not be in the Super Bowl.

While Gronk’s presence is fantastic for the Pats and their offensive game plan, it creates problems for the Eagles’ secondary. With him on the field, and the Patriots’ pass heavy offense, expect the Eagles to have their eyes on him on each play. At 6’6”, Gronk towers over most defenders, meaning he is often somehow open despite double coverage. Brady has been able to throw to him all season, and while the Eagles will be one of the toughest defenses they’ve played, it is practically impossible to limit the huge receiver.

If you are participating in legal online betting for the Super Bowl, you’ll know the Patriots are favored. Gronkowski is a significant part of that deduction. There was speculation that he may not play, giving the Eagles defense a moment of relief, but all that has changed now. If you see any Super Bowl betting props surrounding Gronk, it might be a good idea to take them.