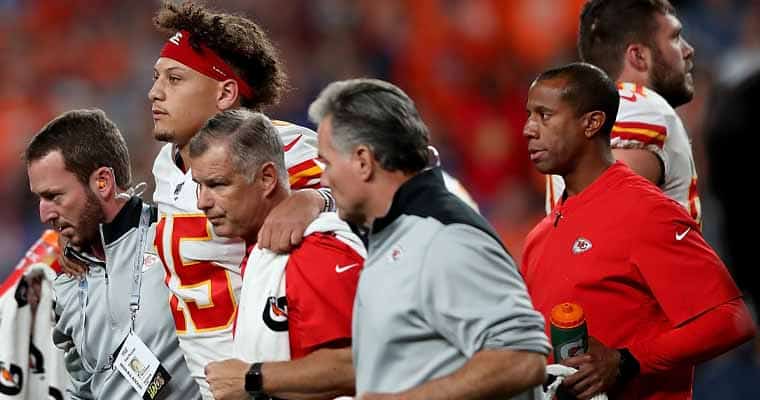 No one ever likes to see a player get hurt during an NFL game.

And that’s especially true for the oddsmakers at online sportsbooks.

Kansas City Chiefs quarterback Patrick Mahomes suffered a patellar dislocation in his right kneecap during the second quarter of the team’s 30-6 blowout road win over the Denver Broncos on Thursday Night Football, according to the latest reports by ESPN.

With nine minutes remaining in the half, Mahomes, who was the 2018 recipient of the NFL Most Valuable Player award last season, was injured on a quarterback sneak on fourth down.

The Chiefs sent a cart onto the field, but Mahomes was able to walk off with the help of the medical staff. After being in the X-ray room for only a couple of minutes, the team ruled him out for the remainder of the game.

In his postgame press conference, Chiefs head coach Andy Reid said he’s rarely seen anyone get hurt on a sneak play, adding that he believes Mahomes will be okay, but the team will know more once they arrived back in Kansas City.

“Not too many people get hurt on a sneak,” Reid said. “It’s a freak thing, and it happens.”

Mahomes will undergo further evaluation once the team is back home and is scheduled to receive an MRI to determine whether any ligaments were torn. If there is no tear, then doctors said the quarterback could return to the lineup in roughly three weeks.

After the game, Mahomes spoke to the team after the win, encouraging the Chiefs to keep working hard despite the minor setback.

“Take care of yourself this weekend,” Mahomes said. “Enjoy yourself. Be smart. We got more to go, baby.” The quarterback also posted on Twitter after the game that he was thankful for the prayers sent his way and that the diagnosis was good news so far.

Awesome team win! Love my brothers! Thank you for all the prayers! Everything looking good so far! #GodisGood #ChiefsKingdom

However, with Mahomes out until the Chiefs play the Tennessee Titans on November 10—a best-case timetable—the sportsbooks still see the injury as bad news for the team, who are now 5-2 overall and have adjusted their Super Bowl 54 betting odds accordingly.

Prior to Mahomes’ injury last night, the Chiefs were listed at +600 at BetOnline, which placed them second among all NFL teams. When converted to an implied probability, the team had a 14.29% chance of winning the Super Bowl this season.

Now, the Chiefs have fallen to fifth place with +1200 odds and a 7.69% chance to lift the Lombardi Trophy for the first time since the franchise’s only Super Bowl victory during the 1969 NFL season.

To add insult to injury—no pun intended—the New England Patriots, the team that defeated the Chiefs in the AFC Championship and went on to win Super Bowl 53 last season, saw their odds improve.

The Patriots were already the favorites at +300 odds, a 25% chance, but the latest NFL betting odds for the 2020 Super Bowl have coach Bill Belichick and quarterback Tom Brady capturing a record seventh title at +225 odds—30.77% implied probability.