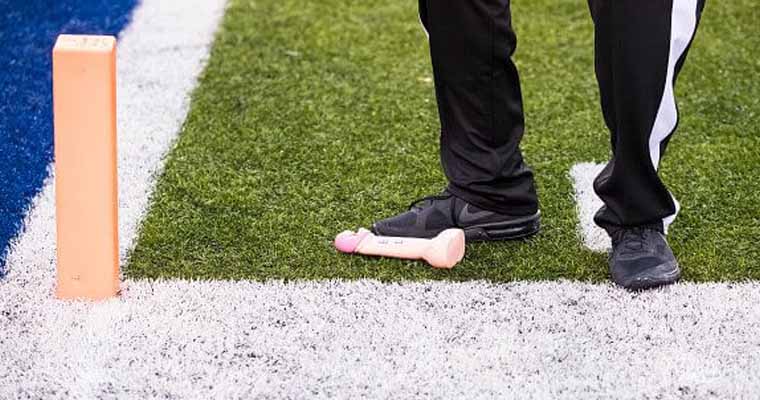 An NFL tradition unlike any other.

When the New England Patriots kick off against the Buffalo Bills as a 7.5-point favorite on Sunday, it will be a sunny 70-degree day at New Era Field in upstate New York, according to the weather report for the Week 4 matchup.

However, the meteorologists likely didn’t account for the roughly 58% chance of raining sex toys.

During the past three AFC East meetings at New Era Field, when the Patriots come to town, the #BillsMafia faithful have begun a new tradition of throwing a dildo—and sometimes many dildos—on the field.

The first known documented instance of the NFL’s new tradition taking place came in 2016 when Patriots wide receiver Chris Hogan caught a pass and was tackled short of the goal line.

And that’s when our floppy friend plopped onto the field of play.

Both teams are undefeated and off to a great start in the first month of the 2019 NFL regular season, coming into the game at 3-0.

It’s clear the oddsmakers believe there is a good chance that another Buffalo wang makes its way onto the field or sideline during the game, and it’s not hard to see why.

NFL Commissioner Roger Goodell hasn’t publicly commented on the tradition, but it’s obvious he despises it since the league issues a lifetime ban from all NFL stadium to anyone who participates. And last year, a Florida man who joined in on the fun was even arrested.

“I did see it,” Tom Brady said after the 2016 matchup. “Yes I did, I did see it. I thought it was funny the ref didn’t want to pick it up. He was kicking it. Nobody wanted to reach down and grab it.”

And realizing they had a unique prop leftover from the party, the brotherly Bills fans decided it should be given to the Patriots golden boy as a gift.

“One hundred percent, it was worth it,” Dillon said

Just don’t bet on the NFL not being a douche about it.