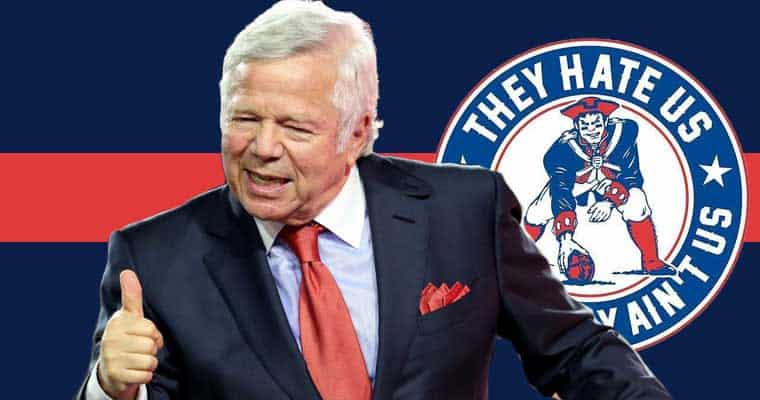 Things are not looking good for the billionaire owner of the New England Patriots.

Robert Kraft was formally charged by the Florida state attorney’s office on Monday with two misdemeanor counts of soliciting a prostitute, coming days after police alleged surveillance footage showed him paying for and receiving sex acts at a spa called Orchids of Asia in Jupiter, FL last month.

It is unknown at this time whether Kraft will be found guilty or plead guilty, be suspended by the National Football League, or if he remains the owner of the Patriots — and BetOnline has released betting odds on what his future looks like.

Currently, the oddsmakers believe he’ll plead guilty since the video evidence is supposed graphic and detailed and believe it’s highly unlikely 77-year-old billionaire will step down as the Pats owner before the start of the 2019 NFL season.

However, the odds on how long a suspension — if any — from the NFL will last is completely up in the air. Below are each of the three Kraft betting lines currently receiving action.

Will Robert Kraft be found guilty or plead guilty?

If Robert Kraft is suspended by the NFL, how long will it be?

Will Robert Kraft be the Patriots owner for Week 1 of the 2019 NFL season?

According to Florida law, soliciting an individual to commit prostitution is listed as a first-degree misdemeanor charge, and if convicted, Kraft could face up to one year in jail, a $5,000 fine, 100 hours of community service, and be required to attend education classes on human trafficking.

“We categorically deny that Mr. Kraft engaged in any illegal activity,” said a spokesperson for Kraft. “Because it is a judicial matter, we will not be commenting further.”

The NFL has also released a statement on the situation: “The NFL is aware of the ongoing law enforcement matter and will continue to monitor developments.”

Kraft was among 25 people in Palm Beach County facing the same misdemeanor charge of soliciting a prostitute after a sting operation led to over 300 arrest warrants being issued across Florida as apart of a six-month investigation into human trafficking at 10 different spas.

None of the individuals — including Kraft — are said to be involved with the human trafficking at any of spa locations.

A court date for Kraft has officially been set for 8:30 a.m. ET on April 24 (one day before the 2019 NFL Draft), but he is not required to make the appearance. Kraft’s attorney, Jack Goldberger, will make the court appearance and represent the Patriots owner throughout the process.