Skip to content
HomeNewsPatriots Strategy In Case Of Gronkowski Absence 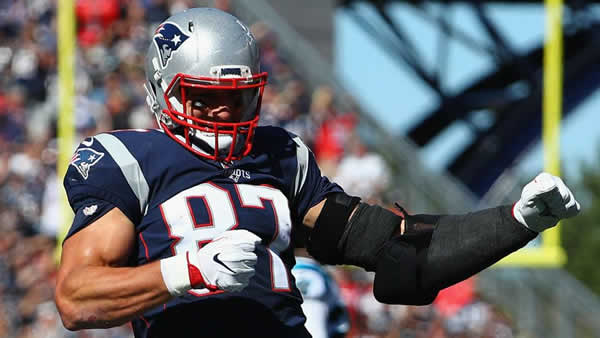 The New England Patriots may be favored to win in most at most betting sites covering betting lines for Super Bowl 52, but it will be a difficult task if they end up missing their star TE Rob Gronkowski. Gronk was left with a concussion from a nasty hit towards the end of the first half of the AFC Championship against the Jacksonville Jaguars. He ended up leaving the game and has since been listed on the Pats’ IR. While his team is optimistic he will be there, the Patriots should explore other strategies if he ends up not being cleared. Luckily for the Pats, they have the depth to sustain themselves without him.

When WR Julian Edelman tore his ACL in the preseason, Gronk became the #1 receiver. At 6’6” and 265 lbs., it is easy to see why. Gronk is an X-factor in the Pats offense. He is a safety’s nightmare and practically unstoppable against smaller corners. Gronk leads the offense in receiving yards with 1,084 on 69 receptions. He has scored 8 touchdowns for the Patriots, making him the most reliable target in the endzone. He is also easy for Brady to see downfield, as he towers above the rest of any team’s defensive secondary. In the postseason, Gronk had 7 catches for 102 yards and a touchdown.

In the case of his absence, the Patriots can rely on alternative tight ends Dwayne Allen, Martellus Bennett and Jacob Hollister. These are not the worst options, though their regular season numbers show how much Gronk took up of the receiving yardage. Allen led the 3 alternatives with 86 yards on 10 catches. Bennett followed with 53 yards on 6 catches. Hollister managed 4 catches for 38 yards. They combined for 1 touchdown. Expect a solid rotation between these 3 players on each offensive drive. They will likely be utilized for short completions to move the chains or work the clock.

TEs are not the only offensive players responsible for catches, which is good news in case of Gronk’s absence. WRs Brandin Cooks, Danny Amendola and Chris Hogan will be constant targets for Brady in the Super Bowl. Cooks has been fantastic since being acquired from the New Orleans Saints. Amendola stepped up to the plate in the AFC Championship and leads all receivers in the postseason. With Gronk out, expect Brady to be hitting these guys up throughout the game.

Another element to the Pats offense is their running game. RBs Dion Lewis, Brandon Bolden and James White have been splitting the carries. Lewis has controlled most of the ball with 24 carries for 96 total yards. White has been their go-to guy in the red zone with 2 touchdowns. When you have Tom Brady at QB, the offense tends to defer to passing. However, running the ball can give Brady a rest and be an effective way of disrupting the defense. The Patriots haven’t been able to run the ball that much in the postseason, and they will have a tough time doing so against the Eagles. If this is the case, there will be more pass plays.

Football betting analysts have explored the possibility of Gronk being out, but there is still plenty of confidence that the Patriots can get things done. In order to play in SB52, he must be cleared by an independent neurologist. Until that happens, the Pats and bettors alike must prepare for a Gronk-less offense.