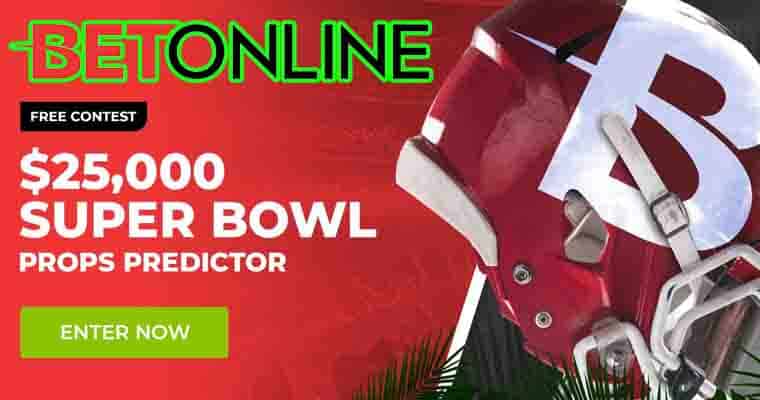 The final game of the NFL season has inspired BetOnline Sportsbook to create a $25,000 Super Bowl Props Predictor contest with absolutely no cost to enter.

While entries to this contest are free, there are some prerequisites prior to the selection of any Super Bowl prop bets that are involved in the contest.

In order to qualify for entry, existing BetOnline members must spend at least $25 betting on Super Bowl LVI props between now and 6:10 PM on February 13th, the day the Cincinnati Bengals will face off against the Los Angeles Rams in SoFi Stadium.

The money spent on these Super Bowl prop bets must be funds that were deposited into members’ accounts and cannot be sourced from sportsbook promo code dollars.

Here are the 20 props for Super Bowl betting that must be correctly selected in order to win some of the $25,000 prize pool that BetOnline is putting up.

Length of the National Anthem

Team to use first coach’s challenge

Most Rushing Yards In Super Bowl 56

Most Receiving Yards In SB LVI

Who Will Throw First TD Pass In Super Bowl LVI?

Defense or Special Teams to Score a TD

Once selections are made for each of the 20 Super Bowl prop bets above they are saved automatically. These Super Bowl 56 picks can be updated up until just before kickoff on February 13th.

Each correct pick is worth one point. Once Super Bowl LVI is over, points will be tallied the following day and the top 1500 finishers will win cash prizes based on the following schedule.

These rewards are granted in the form of “sportsbook Free Play prizes,” and will be added to winning members’ accounts on the Wednesday following Super Bowl 56.

BetOnline’s Free Play prizes are subject to a 1x rollover requirement, with an additional stipulation that no funds can be withdrawn until March 7th.

That gives winners some time to make wise sports betting decisions over several wagers instead of succumbing to the temptation to place a large single bet and complete the terms.

Only one entry per member is allowed, so make haste and submit your 20 correct answers to BetOnline’s Super Bowl props contest today.