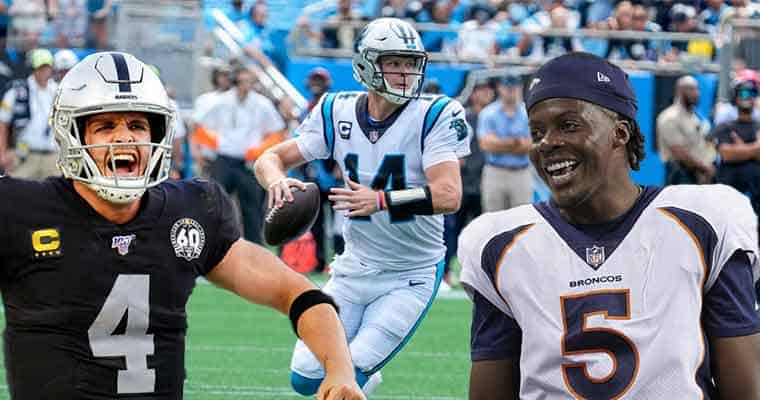 Historic pro football data suggests that a 2-0 start to the season indicates an over 60% likelihood of qualifying for the NFL Playoffs. Heck, with the league’s expanded 14-team postseason format, that number can be expected to rise in the coming years, and that’s great news for the Carolina Panthers, Las Vegas Raiders, and Denver Broncos.

All three teams are carrying 2-0 records into their Week 3 games, and legal NFL betting sites have produced the following three lines predicting whether or not they will continue on their unbeaten path.

Two weeks ago, this game had the makings of a tight contest that anyone could win. Now that Texans QB Tyrod Taylor is out with injury, Houston has announced that troubled quarterback Deshaun Watson will remain away from the team for an unspecified amount of time and will not suit up for Thursday night’s game.

Taylor is questionable and could be available for Week 3, but given the rushed four-day timetable, it is most likely that rookie David Mills will earn his first NFL start. Laying some action this early is risky, but the gamble could pay off if Taylor can start the game for Texans as they should have no issue keeping the margin lower than the 8.0 NFL point spread if he is under center.

Prediction –  Carolina Moves On To 3-0 But Does Not Cover The 8.0 Spread If Tyrod Taylor Starts

The Miami Dolphins’ starting quarterback status for Sunday’s game against the Raiders is also uncertain as Tua Tagovailoa and his ailing ribs could keep him on the sidelines for Week 3. Jacoby Brissett will get the nod if Tua can’t go, and if his performance resembles his play against the Buffalo Bills last weekend, expect the Raiders to easily cover the 4 point spread.

Dolphins head coach Brian Flores is uncertain as to whether Tagovailoa will play, citing his pain tolerance threshold as the ultimate decider. Let’s not sleep on the Raiders, either. They’re playing above their heads and have reeled off victories against the Baltimore Ravens and Pittsburgh Steelers, two giants of the AFC North.

The future could be now in Denver as their Broncos have not only jumped out to a solid 2-0 start to the season, they’re favored to win their third by over 10 points. Teddy Bridgewater has delivered stability at the quarterback position in Denver, something the franchise has been lacking since Peyton Manning retired.

Last week, the New York Jets rookie QB Zack Wilson threw four interceptions against the New England Patriots and their stingy defense, and we expect him to continue to struggle against the Broncos pass rush in Week 3.

Nearly 75% of NFL teams that win their first three games of the season earn a ticket to the postseason, and with 14 spots now available, things are looking up for Denver, Carolina, and Las Vegas.

We’re not suggesting that these three teams should start packing their bags for SoFi Stadium in February of 2022, but betting on NFL Playoff odds for any of these three franchises is not a bad idea just prior to Week 3 kickoff.