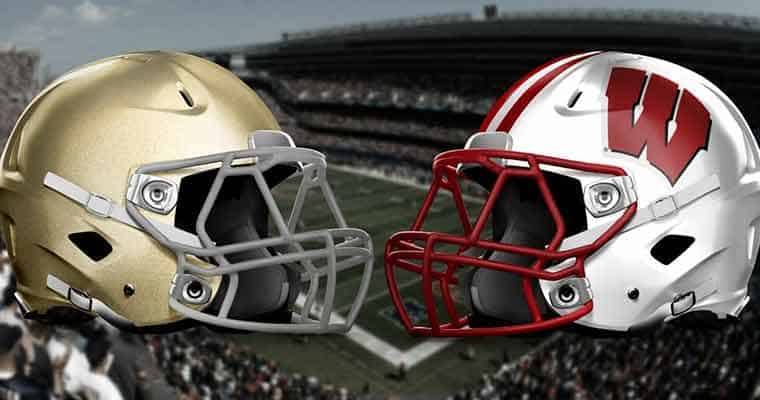 Despite the fact that the Notre Dame Fighting Irish football team is undefeated with a perfect 3-0 record, online College Football betting sites are suggesting that the Wisconsin Badgers will defend their home turf when head coach Brian Kelly and company visit this Saturday.

For insight into why a one-loss Wisconsin team is predicted to beat Notre Dame by 5 or more points, have a look at the results of their first three games.

This weekend, bettors will lean whether Notre Dame simply plays teams close, or are due for a whipping from a hard-nosed team from the Big Ten that is hungry for an out-of-conference victory.

The Badgers’ lone loss this season came at the hands of the Penn State Nittany Lions who are currently ranked 6th in the AP Top 25 and are poised to make a run for the CFP.

If Wisconsin wants to remain alive in the odds for betting on the College Football Playoffs, they’ll need to notch a victory against Notre Dame at home this Saturday, and then go on to win the remainder of their Big Ten schedule.

That’s easier said than done for the Badgers, as that will include games against the Michigan Wolverines, Iowa Hawkeyes, and a potential Big Ten Conference Championship Game against the Ohio State Buckeyes.

The same cannot be said for Notre Dame. Outside of an October 2nd home game against the #8 Cincinnati Bearcats, the Fighting Irish do not face a legitimate CFP contender for the remainder of the 2021-22 NCAAF season.

Last season, due to the bizarre circumstances surrounding the spread of COVID-19, NCAA Football had to adjust their season schedules on the fly. This caused Notre Dame to join up with the Atlantic Coast Conference (ACC) for the 2020 season where they performed well enough to earn a spot in the College Football Playoffs.

This year the Fighting Irish have resumed their independent status, and if they can survive the next two weekends against Wisconsin and the Cincinnati Bearcats, then they will have a solid chance of finishing the 2021-22 NCAA Football season with an unblemished record.

Their current betting odds for the 2021-22 NCAAF National Champion places ND at 12th overall – the same as their current AP Top 25 ranking –  with a +12000 moneyline. The only NCAA Football team rated ahead of them remaining on their schedule is Cincinnati, who they play the weekend after next at home.

Of course, if the Irish fumble this weekend against the Badgers, the Cincinnati game will not feature the same appeal of two undefeated teams vying for a shot at a CFP Title.

However, if Notre Dame does indeed come through as an underdog and hands Wisconsin their second defeat in just four games, Notre Dame vs. Cincinnati odds will be red hot at online sports betting sites as the winner will be skating downhill toward the College Football Playoffs at the end of the year.

Although this Notre Dame betting line gives plenty of cause for concern, we cannot help but be selfishly optimistic for the Fighting Irish to not only cover, but win, so that the stage can be set for an epic Cincinnati vs. Notre Dame matchup for the ages with the Golden Dome dotting the horizon.