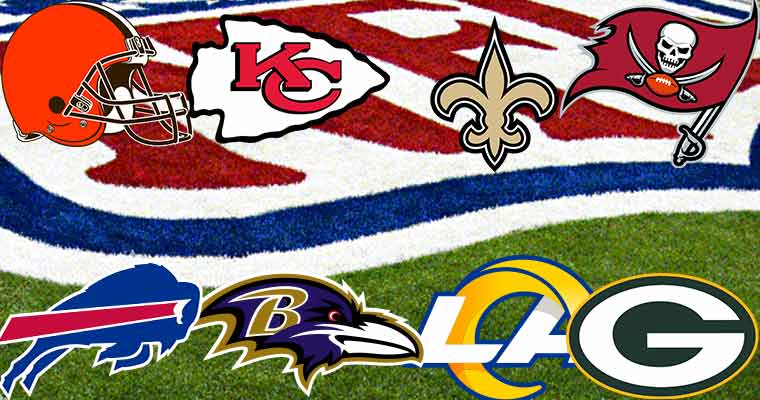 The NFL Playoff betting odds predict that the number one seeds, the Kansas City Chiefs, and the Green Bay Packers, will win by a touchdown or more and advance to their respective Conference Championship Games.

Neither KC’s Patrick Mahomes nor Green Bay’s Aaron Rodgers are strangers to Super Bowl success. Rodgers bagged a Lombardi back in 2011, and Mahomes was the Super Bowl MVP last season.

The Cleveland Browns have finally lived up to their preseason NFL odds and delivered not only a playoff appearance but have also advanced beyond the Wild Card round and now find themselves among the final 8 teams.

The Los Angeles Rams have returned to playoff glory after missing the postseason last year following a loss in Super Bowl 53. The Rams and the Browns have plenty to be proud of, but Bovada NFL Sportsbook forecasts that their run will end this weekend.

The 2 vs. 5 matchups are expected to be much more competitive, with both featuring margins of a field goal or less. Each one of these teams has reasonable hopes of going all the way this year, but only two of these franchises will be alive in the odds for Super Bowl 55 after this weekend’s games conclude.

Baltimore vs. the Bills feature two young QBs who run the ball often and like to control the pace on offense. Both teams also have impressive defenses that keep their opponent’s scoring efforts at bay.  The over-under suggests a Buffalo win by a score of 27-24.

The Bills will look for quarterback Josh Allen to continue his excellent play and finally deliver a Super Bowl title to Buffalo. The Bills have never won a Lombardi Trophy, and Allen is poised to take the sting out of losing four Super Bowls in a row in the early 90s for a championship starved town.

Legacy is on the line when Drew Brees and the Saints face Tom Brady and the Buccanneers, as both are over 40 years old and have limited time left in their playing careers.

Both Brees and Brady will go down as two of the best quarterbacks of all time and are sure-fire first-ballot hall-of-famers.

Do not miss this opportunity to watch these two legends compete in what could be either of their final game, and while you are at it, take advantage of the pro football lines at our top online sports betting sites that offer NFL Playoff odds.