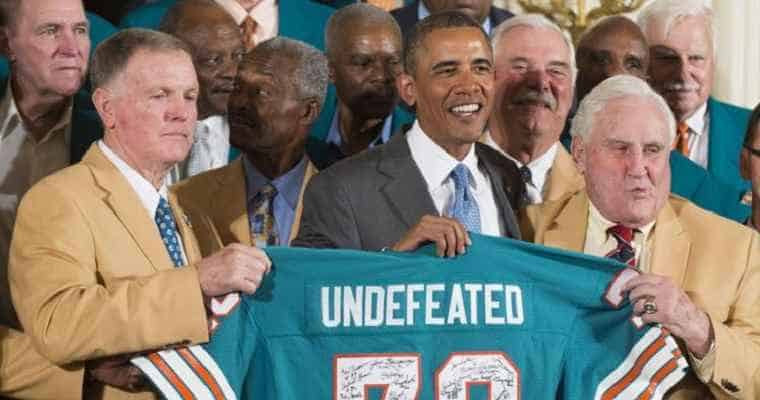 Champagne bottles are popping around the country once again as members of the 1972 Miami Dolphins breathe a sigh a relief and celebrate the fact that they are the only team in NFL history that can claim the title of perfect.

The Pittsburgh Steelers were threatening to achieve perfection on the pro football gridiron, but the efforts of the Washington Football Team has foiled their plans.

It has been 47 years since the Dolphins completed their perfect 17-0 record by finishing off the Washington Redskins by a score of 14-7 in Super Bowl VII.

That unblemished season occurred early on during the NFL’s Super Bowl Era, and at that time, it was likely assumed that there would be another undefeated team before too long. By the mid-1980s, Miami’s accomplishment was on the minds of any team that advanced far enough into the season without suffering a loss.

Many remember the 1985 Chicago Bears and their historic championship run where they went 18-1 and captured the franchise’s lone Lombardi Trophy.

What many may not recall is that their lone loss was to Dan Marino and the Miami Dolphins that year, where they were blown out on Monday Night Football by a score of 38-24.

Despite the many accomplishments that Dan Marino achieved for the Dolphins, none will likely matter more than his performance against the Bears during the 1985 NFL season.

As an odd side note, many point to Super Bowl 20 as the origination of NFL prop bets, as wagers on whether Bears defensive tackle William “Refrigerator” Perry would score a touchdown during the game took in significant action that year.

It was likely this prop bet that prompted Chicago head coach Mike Ditka to insert Perry into the game for a late goal-line score instead of opting to allow Walter Payton, arguably the greatest running back of all time, to get a chance to score in the biggest game of his life.

Payton was visibly sour after the game and carried the grievance with him to his grave.

The 2020-2021 Pittsburgh Steelers are now the latest team to fall short of perfection after losing to Washington on Tuesday evening.

Oddsmakers were not surprised, as is evidenced by the following betting line provided by Bovada Sportsbook.

The Steelers’ +650 NFL betting odds roughly translates to a 13% chance of finishing the regular season undefeated, and after their loss to Washington, they’re entire 2020 destiny is now up in the air as they have proven that they can fall to anyone.

Although they’ve now suffered a highly questionable loss, the Super Bowl LV odds still list Pittsburgh as one of the most likely teams to win it all.

Considering the above SB 55 betting odds, it would appear that if the Kansas City Chiefs don’t reach the Super Bowl, then it will indeed be the Steelers, and they’ll face either the New Orleans Saints or the Green Bay Packers.

That indicates a potential AFC Championship Game between the Chiefs and the Steelers, and that matchup ought to warn the hearts of pro football fans and NFL bettors around the world during this frosty holiday season.