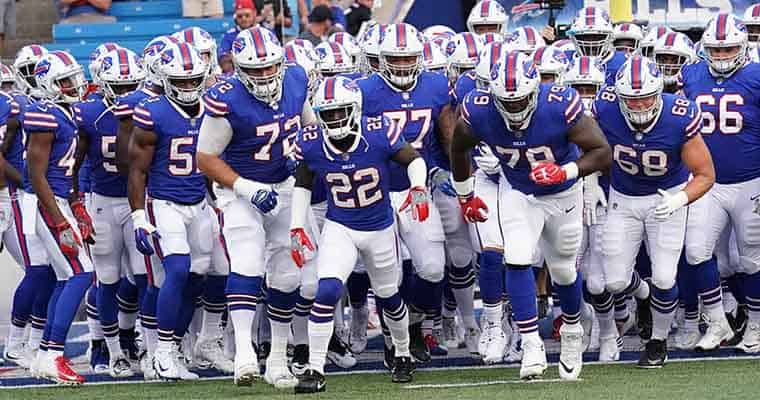 The first game of the 2022-23 NFL Preseason is less than a week away as the Las Vegas Raiders and Jacksonville Jaguars prepare to take to the field in Canton, Ohio on August 4th.

Legal NFL betting sites have game lines posted for next Thursday night’s preseason opener that favors the Raiders to win by a margin of 2 points.

While the opening game of the NFL preseason will demand a national television audience, the actual contest itself is rather dull and mostly comprised of third and fourth-string players that may or may not be on the final 53-man roster come September.

We say this because it will be difficult to gauge the accuracy of the above line for football betting so we suggest approaching these NFL preseason odds with caution.

There will certainly be betting lines for each and every game in this year’s NFL preseason, but the real intrigue of placing football bets prior to the regular season is in the futures odds.

Combining the NFL futures odds for Super Bowl betting with props for division and conference winners in 2022-23 gives gamblers a loose playoff picture of the teams that will be involved.

Anything can happen between now and January 16th when the first Wild Card game is played this postseason, but here are the teams that are currently projected to make the playoffs based on the preseason odds.

The only oddball outlier on paper is the Denver Broncos. Apparently, NFL oddsmakers feel that the acquisition of quarterback Russell Wilson from the Seattle Seahawks will galvanize the team under his leadership and abilities.

Notably missing are the Tennessee Titans who won the AFC South in 2021-22. Perhaps the loss of A.J. Brown and Julio Jones will be too much for the Titans to overcome this year, especially with the surging Colts in the division.

Tom Brady and the Bucs are poised for another championship run according to the current preseason NFL odds, and outside of the Philadelphia Eagles, most of these franchises are returnees from last year’s playoffs.

A sleeper candidate for making the playoffs in the NFC is the New Orleans Saints who added WR Jarvis Landry and safety Tyrann Mathieu in the offseason. The loss of head coach Sean Payton should be offset for at least a season by the installation of last year’s defensive coordinator, Dennis Allen, into the role.

Who Will Win Super Bowl 57?

Ultimately, the two teams that are projected to meet in Super Bowl LVII are the Bills and Buccaneers. Buffalo is still trying to earn their first Lombardi Trophy in franchise history, and at the moment, NFL futures suggest that they’ll win Super Bowl 57.