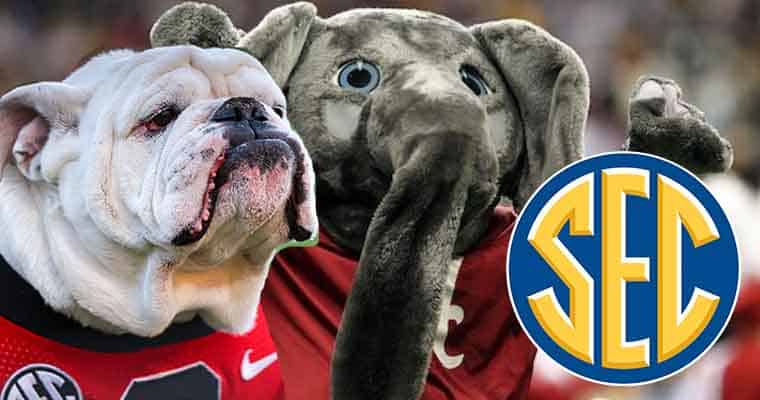 There is no longer any question as to what the most dominant conference in college football is entering the 2022 season. While the Clemson Tigers kept the door open for the ACC to cling close to the top for many seasons, their recent recession into mediocrity has established the SEC as the clear-cut paramount grouping of NCAAF programs.

The top two teams featured in the SEC futures also represent two of the top three moneyline earners when considering options for betting on the CFP.

The Texas A&M Aggies, while a distant third in the futures odds for winning the SEC, are featured fifth overall in the NCAA College Football National Championship betting odds.

That’s only further evidence of the influence possessed by the Southeastern Conference, as winning the SEC involves nearly certain inclusion in the CFP bracket.

Given the state of college football betting at the moment, it is not unreasonable to suggest that the two SEC Championship game contenders would rematch for the CFP title in January.

According to the above NCAAF futures, we can assume that Clemson will win the ACC and the Ohio State Buckeyes will earn a trip to the College Football Playoffs via a Big Ten Championship.

If the top four teams presented in the final CFP rankings this year reflect the above futures, then an all-SEC National Championship Game will be possible if Georgia and Alabama beat the top teams from the ACC and Big Ten in the semifinals.

While the SEC odds suggest that the Crimson Tide and Bulldogs stand head-and-shoulders above the rest of the pack, are there any programs that could threaten to topple the highest odds-getters in 2022?

Here are the betting odds for each division of the SEC for further guidance on potential sleepers.

Georgia appears to have a clear path toward winning the SEC East as Kentucky and Florida do not offer much of a roadblock on their journey toward the championship game on December 3rd.

Alabama has a tougher path to sled as the Texas A&M Aggies under head coach Jumbo Fisher are poised to take down the Crimson Tide twice in as many years.

While A&M has proven their ability to match up well against Alabama, they’ve yet to post the same or better win-loss record during the same campaign, thus giving away any chance of making it to the SEC Championship Game over the Crimson Tide.

It is only a matter of time before Fisher ends up at the top of the SEC come season’s end, so don’t sleep on Texas A&M’s futures at online football betting sites. Laying some action at this early juncture guarantees massive payouts if you believe that the Aggies have a shot at winning a conference crown in 2022-23.