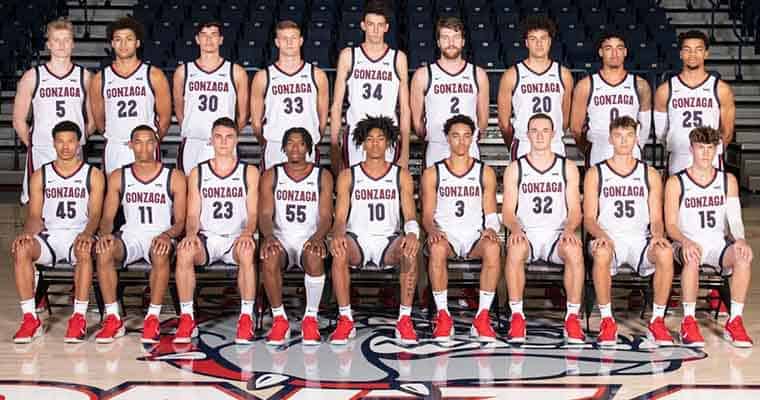 The First Four gets started tonight which marks the official beginning of the 2022 March Madness Tournament to determine the National Champion of NCAA College Basketball.

Most legal March Madness betting sites list the Gonzaga Bulldogs as the team that has the best chance to cut down the nets at the end of the 2022 NCAA Tournament.

Gonzaga was also favored to win it all last season but ultimately fell to the Baylor Bears in the finals.

The Bulldogs are a college basketball powerhouse and have been so for 20+ years now. It seems like it should be only a matter of time before they win a March Madness Tournament.

Even though Gonzaga is favored, the odds for college basketball betting will still reward online NCAAB gamblers with payouts nearly equal to the amount risked.

The current moneyline odds for Gonzaga to win March Madness are set at -160 which is inordinately favorable considering there are 67 other teams that are also in the running. Wagers that total $160 will be required to earn a net payout of $100 on a Gonzaga championship in 2022.

Before the Round of 64 can begin, today’s First Four games must conclude and complete the field. Here are the betting lines for the play-in games going down this evening.

If the above basketball betting options for the First Four aren’t the most attractive wagering options ever posted, there are several March Madness prop bets that are available in advance of game lines for the Round of 64.

Online basketball gamblers that want to narrow their risk when betting on Gonzaga during the 2022 March Madness Tournament can opt for the following NCAAB prop grants that opportunity.

The above line is basically the same thing as a straight-up handshake bet with the bookie on whether or not Gonzaga is the last #1 seed standing. That designation often requires not only beating another top seed (or two), but likely involves making it all the way to the March Madness Finals.

The NCAA Men’s Basketball Championship Tournament features exciting basketball in each and every round because of the opportunity and routine occurrences of upset wins.

A March Madness upset refers to the lower seed winning and does not necessarily mean the NCAA Basketball betting odds underdog getting the victory. That said, teams seeded 14 or higher are rarely projected to win.

The above betting line for a March Madness upset is hovering very close to even and implies that there is a high likelihood of a 1, 2, or 3-seed getting knocked off in the first round.

Even the boring outcome result of no 14 or higher seeds winning their game is paying out at even money so lay some action now and collect this Friday night when the Round of 64 concludes.