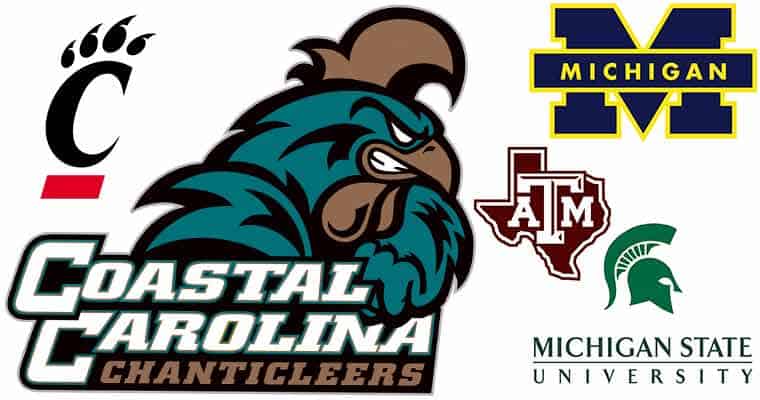 There are still three weekends of college football to play prior to the CFP Selection Committee releasing their first batch of rankings on November 2nd, but the playoff picture is already starting to solidify.

While the current top 25 rankings simply illustrate the current hierarchy of NCAA College Football, no effort is granted by the pollsters to project which team will win the national championship save for the #1 votes in parenthesis.

Futures odds at College Football betting sites do require forecasting by the bookmakers, so quite often there will be undefeated teams that don’t seem to be given a fair chance of winning it all.

The 5-0 Cincinnati Bearcats are listed with a +1600 moneyline at BetOnline and are ranked third in the nation overall. Penn State was the final top-ranked program remaining on their schedule, and now it is on the Bearcats’ roster and coaching staff to round out their 2021-22 campaign without a loss.

Legal online betting sites offering College Football Playoff odds rank Cincinnati 4th behind the Georgia Bulldogs, Alabama Crimson Tide, and Ohio State Buckeyes. That indicates a belief by the bookies that the Bearcats will qualify for the 2021-22 CFP, edging out the likes of the Oklahoma Sooners.

The 6th ranked Oklahoma Sooners are also undefeated and in control of their own destiny. If OK wins their remaining games and conference championship, a Bearcat CFP bid will be in jeopardy.

The meat of the Big Ten East schedule has yet to get underway as Michigan, Michigan State, and Ohio State have yet to play each other. The team that comes out on top between the three of them will almost certainly compete against the Iowa Hawkeyes in the Big Ten Championship Game with a trip to the NCAAF Playoffs on the line.

The Wolverines have +3300 National Championship odds while the Spartans are a few pegs lower at +6600. If either of these Michigan-based teams can ouster Ohio State and win the Big Ten, especially if they can do so undefeated, they’ll certainly be one of the final four college football teams standing come late December.

Although highly ranked prior to suffering 2 losses, the Texas A&M Aggies are once again relevant following their shocking upset victory against the #1 Alabama Crimson Tide last weekend. Throw rankings out the window – what the Aggies need to do is win their remaining games and for Alabama to suffer one more SEC loss.

If that scenario occurs, Texas A&M would win the SEC West and face the Georgia Bulldogs for the conference title. An Aggies defeat over the Bulldogs would test the limits of the winner of the Southeastern Conference getting an automatic bid to the CFP, and there is a +8000 moneyline on that possibility currently taking action.

The Coastal Carolina Chanticleers have +20000 odds for betting on the CFP winner at legal football betting sites. They are the 16th ranked team and appear positioned to finish the year with an unblemished record.

While the Chanticleers must be commended on their success, they should seek out tougher out-of-conference opponents in the future as there is no measuring stick by which to estimate their abilities at this juncture.

Avoid this sucker bet because even if all 130 NCAA Division I FBS football programs suffer two losses, Coastal Carolina still ain’t getting in the College Football Playoffs.