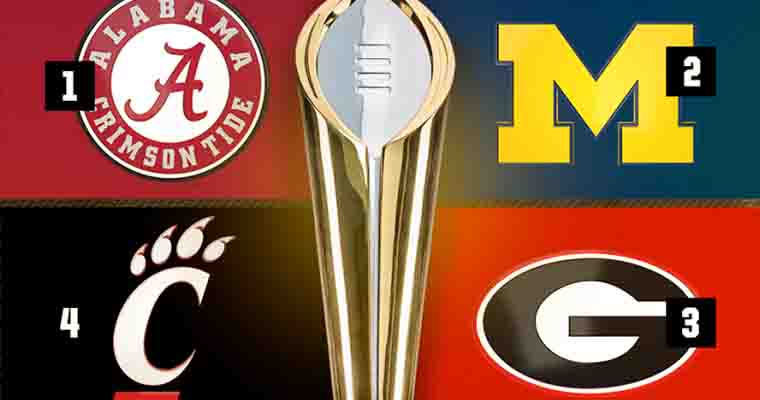 While the Alabama Crimson Tide may have secured their passage into the College Football Playoffs by handily defeating the Georgia Bulldogs in the SEC Championship Game last Saturday, the odds for CFP betting suggest that things may go differently when the NCAAF National Title is decided.

College Football betting sites are projecting that the Bulldogs will blow past the Michigan Wolverines in the Orange Bowl on December 31.

Michigan was able to win the Big Ten and beat the Ohio State Buckeyes for the first time during the tenure of head coach Jim Harbaugh, but oddsmakers don’t believe they have enough left in the tank to beat a Bulldogs squad who were #1 for most of the year.

The Cinderella story of College Football in 2021-22 is the Cincinnati Bearcats who have claimed a final four spot in the CFP, allowing them to face off against #1 Alabama in the Cotton Bowl.

CFP National Championship betting sites are not predicting success for the Bearcats who are a two-touchdown underdog to the Crimson Tide. If the above NCAAF betting lines holds true, an SEC Championship rematch will decide the National Title winner.

The above NCAAF futures line features Alabama as the most likely team to win the CFP Championship on January 10th in Indianapolis with a 20 point lead over the Bulldogs in the moneyline odds.

The below CFP prop bet favors an alternate outcome where the Bulldogs beat Alabama and win the National Championship while finishing in second place in the SEC.

The second most likely outcome is a scenario where Alabama beats Georgia. For college football bettors that believe in Cincinnati, large profits can be secured regardless of where the action is laid.

The 14 point spread that separates Cincinnati from Alabama is tempting, but the Crimson Tide are unpredictable and either blow teams out or play closely contested games.

The true wild card of the CFP bracket is Michigan. The Wolverines seemed vulnerable following their late-season loss to the Michigan State Spartans, but now they’re firmly entrenched into the final four and are two wins away from capturing championship glory.

The odds for the Wolverines to win the CFP National Championship are set at +600 which is ridiculously high considering they are a one-loss Big Ten Champion with only two games remaining to be played.

A wager of $1 on Michigan’s +600 CFP odds will net a cash sum of $6 if they win the title, but only if bets are placed now. Once the Wolverines have won their semifinal CFP game against the Bulldogs, the NCAAF moneyline odds will shrink considerably and deliver much smaller payouts.

The same goes for all other teams still alive in the CFP, because even the favored outcomes are generating positive betting odds at the moment. Act now.