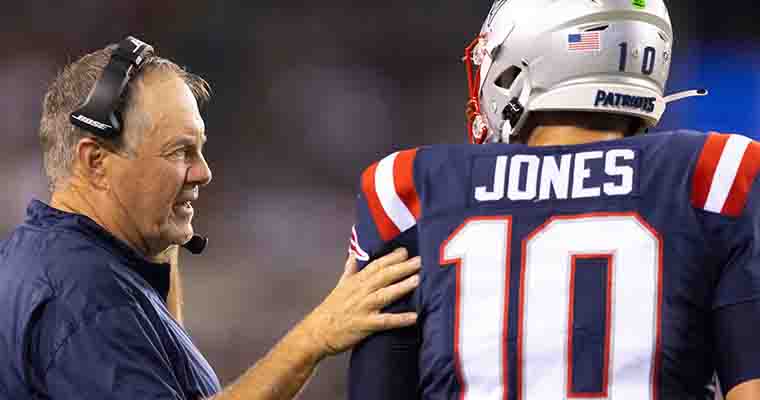 The NFL is now in danger of New England Patriots head coach Bill Belichick never retiring now that he has found his next franchise quarterback in rookie Mac Jones.

Oh, what a sweet flex it would be for Belichick to hand Tom Brady and the Tampa Bay Buccaneers a Super Bowl loss before the legendary QB exits the game. Oddsmakers at NFL betting sites are predicting that New England and Tampa Bay will make it to Super Bowl LVI with the Bucs getting the edge, but we expect that gap to narrow as the postseason draws closer.

During the 2020 NFL season, the Patriots struggled without the services of Tom Brady, but now that a long-term answer has been found in Mac Jones, New England’s has claimed the #1 seed in the AFC following their crushing 14-10 beat down of the Buffalo Bills on Monday Night Football.

That victory has put them atop the AFC East and in first place in the conference ahead of the surging Kansas City Chiefs. It is the Chiefs who appear to be the only team that can offer any resistance to the Patriots in the NFL Playoffs unless the Tennessee Titans can get healthy and with a full-strength Derrick Henry returning to the lineup.

The road is much tougher in the NFC where the Buccaneers find themselves in the lead in the NFC South and would qualify as the #3 seed if the season ended today.

Betting on the NFL Playoffs for either team seems like a certainty at this point as it would take a major collapse for Tampa or New England to lose their grip on their respective division leads.

Once the postseason actually begins, the Bucs will have the tougher trail to blaze on the way to Super Bowl 56, but their sea legs were already tested and proven last season.

In 2020, Tom Brady and the Buccaneers won three consecutive road games in the playoffs on their way to hoisting another Lombardi Trophy, so keep that in mind when betting on the Super Bowl this February.

Something else to keep in mind is that Bill Belichick is a wizard and will spin his dark alchemy throughout all hours of the evening and early morning in preparation for his revenge, and that prospect should keep Buccaneers fans up at night.

As of this writing, the Super Bowl 56 futures feature the Bucs with a 100-point lead in the moneyline over New England, but we expect that gap to close over the next few weeks.

That means that the best profits can be secured now by betting on the Patriots to win Super Bowl LVI. Alternatively, if you’re a gambler that is intent on laying some action on the Buccaneers winning SB 56, consider doing so later once the New England hype crests.

The below Super Bowl futures offer large profit potential for all teams, especially if you’re considering wagering on a team other than New England or Tampa.