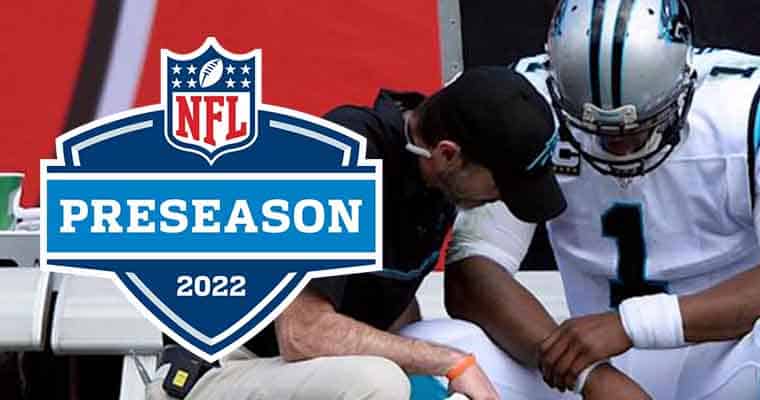 Preseason NFL games are often a chore to get through. The first few weeks of preseason NFL action are mostly comprised of rookies and free agents that are trying to make the team.

When Tom Brady and a loaded Buccaneers team are traveling to face the lowly Detroit Lions, it is easy to apply logic to the odds offered for NFL betting and lay some action on them.

The same cannot be said for the lineups full of randos competing against each other to earn a spot on the final 53-man roster.

NFL oddsmakers at online sportsbooks have the same problem. There is no guarantee as to who will start or finish the game at each position on the field, so anything can happen in regard to the total points scored, the winning team, and the over/under.

So, how do NFL betting aficionados solve this riddle and keep from losing their shirt when wagering on preseason football? Here are a few helpful hints to assist you when laying some action at the betting sites that are listed among our online sportsbook reviews.

As mentioned earlier, veterans that are secure in their roles on the team will not play for very long in a given NFL preseason game. Established starters at quarterback, wide receiver, and running back will rarely last longer than a drive or two during the opening games.

Franchises with younger players will keep their potential starters in the lineup longer than usual, and because they are battling for a roster spot, their collective efforts will typically be greater than that of their opponents.

Be Aware Of Teams That Are Deep At The Quarterback Position

While some NFL franchises do not even possess one single quality quarterback, others are stacked 2 or 3-deep at the position. Other than the center, no player touches the ball more than the quarterback and their impact on the game is unquestionably vital.

Inserting a veteran QB with experience into a preseason game where opponents are mostly raw can cause the scoreboard to light up, especially if they stay in the game for several drives.

An easier way to wager on preseason games is to partake in NFL prop bets for outcomes that don’t directly involve winning and losing teams. As a word of warning, prop bets for NFL preseason games can be hard to come by as oddsmakers are wary to produce lines for occurrences that are so difficult to track and predict.

Betting odds for player stats and totals, as well as over/under lines for each team are common, but as the preseason moves on, more props are made available to keep gamblers active throughout the entire game.

Since the players that will actually be competing in the game are so difficult to anticipate, why not wait until after kickoff to place a bet? That’s exactly what live NFL betting lines allow for – odds that stay active from the first through fourth quarters.

That said, we advise waiting until the second half to see who is playing mop-up duty and base your expectations on their potential.