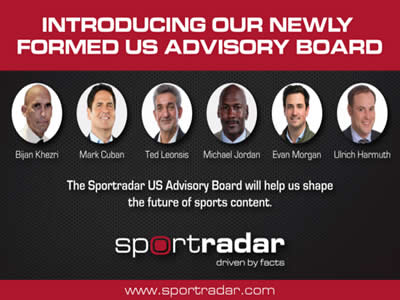 Although it is too soon to tell, it appears as if sports betting is going to be legalized in America in the near future. Because of the dominance of fantasy sports, which are considered a game of skill, more and more people are starting to lobby the government on behalf of sports betting, proclaiming that it’s the same level of “skill” involved and it’s unfair to legalize one while leaving the other illegal. And nowhere in America is there more confidence surrounding the legalization of sports betting than in the NBA, evidenced by different owners betting millions of dollars on the rise of Sportradar AG, a data company that deals primarily with bookmakers.

And we’re not talking about any lightweight owners here. You have Ted Leonis, owner of the Washington Wizards on board. You have the always outspoken Mark Cuban, owners of the Dallas Mavericks. And you have the greatest basketball player of all time, Michael Jordan, owner of the Charlotte Hornets.

Leonis is the company’s lead backer, contributing most of the $44 million to the Swiss company. A former AOL executive, Leonis certainly has the funds. Though more than that, he has the confidence that Sportradar will become a global treasure once sports betting is legalized. Cuban and Jordan seem to feel the same way.

According to Leonis in an interview, the gaming genre and fraud detection practices overseas “have been perfected,” adding, “So now that they’ve come to the US, I just felt they were just so well-positioned.” What Leonis is saying here is that those things that work well for betting in Europe have arrived in the USA, and with the NBA being such a popular sport already, the two will be a perfect marriage and make for some great betting.

Betting on the NFL alone, over a 16-game regular season and a few more playoff games, totals over $100 billion. Following the money, Leonis says it’s an inevitability that sports betting will be legalized in the US. You cannot ignore that amount of money for very long.

Sportradar is forming an advisory board in the US, and Jordan, Cuban and Leonis will head up this board. To date, the company already has exclusive rights to distribute data for the NFL, NHL, NASCAR, and will soon probably have such for the NBA, MLB, and perhaps even collegiate sports, though that last one is a big maybe, since student athletes are treated differently than professionals.

Cuban, a tech billionaire, said in an interview that, “Data drives the sports world…Sportradar is the leading global provider.” The plan is for these big-named owners to use their cache to make the company much bigger and to put pressure on government. More than the money, it’s the names backing the plan. Leonis not only owns the Wizards, but also another popular DC franchise, the Washington Capitals. And, well, Michael Jordan is still one of the biggest names in basketball, and almost universally recognized as the best player in history. With these owners standing behind it, the plan is to get sports betting on the docket sooner rather than later.

Though whether it takes one year or ten years, the owners feel that it’s inevitable it will be legalized. And given how things with money behind them unfold, they’re probably correct.