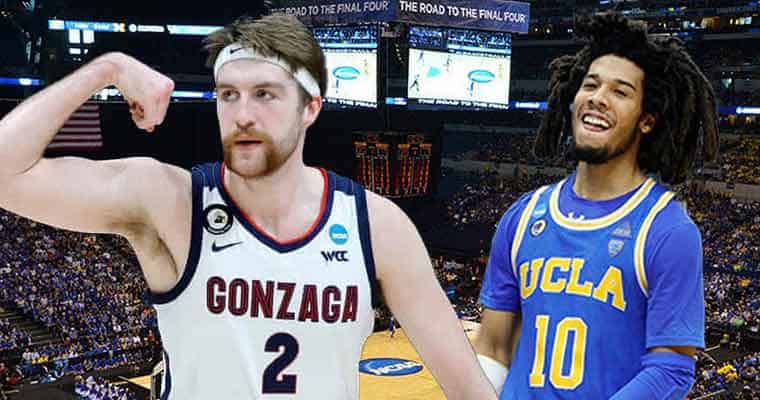 The UCLA Bruins have become the 6th team all-time to make it to the Final Four as a double-digit seed by defeating the 1-seeded Michigan Wolverines by a score of 51-49 in the Elite 8.

The Bruins played in the First Four in the tournament’s play-in round, and are the second team in history to make it into the Final Four after participating in those opening four contests (the first was VCU in 2011).

Double-Digit Seeds That Advanced To The Final Four

If you need more accolades for the UCLA Bruins basketball program, they have the most NCAA Men’s College Basketball Championships in the history of the sport with 11, which places them 3 titles ahead of the nearest challenger, the Kentucky Wildcats.

With so many honors stacked in UCLA’s trophy case, one could assume that they’d be favored to continue their winning ways, but in actuality, March Madness sportsbooks have featured them as an underdog in each round of the tourney so far following the First Four.

We here at Legal Betting Online can hardly blame online bookmakers as it appears they’ve run into a buzzsaw in the Final Four by the name of the Gonzaga Bulldogs.

Although Gonzaga has yet to win March Madness, they’ve become a dominant college basketball program that routinely wins their West Coast Conference. Since the mid-1990s, the Bulldogs have parlayed that automatic tournament bid into deep postseason runs, but they’ve yet to make it further than losing in the NCAAB Final.

Online sportsbooks that offer odds on the Final Four do not believe that UCLA has what it takes to outlast Gonzaga, despite their superior history and much larger student population.

Sure, when it comes to NCAA hoops, size matters, but ultimately, college basketball betting sites are only concerned with what the final outcome will be, and they are unanimously suggesting that Gonzaga beats the Bruins in a rout.

The Houston Cougars are in uncharted territory, as they’ve never made it to the Final Four before. Oddsmakers across the board are predicting that the Baylor Bears will move beyond the Cougars and battle the winner of UCLA vs. Gonzaga, but the game is expected to be more closely contested than the other semifinal.

We’ve provided a comparison of the Final Four betting lines from our top three online NCAAB sportsbooks for the purposes of illustrating the fact that each site will offer odds that differ.

Belonging to more than one sportsbook allows bettors to shop around and find the line that gives them a greater edge, and usually, a higher payout.

For instance, bettors that intend to lay some action on UCLA to defeat the Gonzaga Bulldogs would be wise to opt for doing business with MyBookie, as their money line odds are the highest for the Bruins at +750.

Sure, you can make the same wager at one of the other two online sportsbooks, but you’ll be earning between $25 to $50 less for the same outcome.