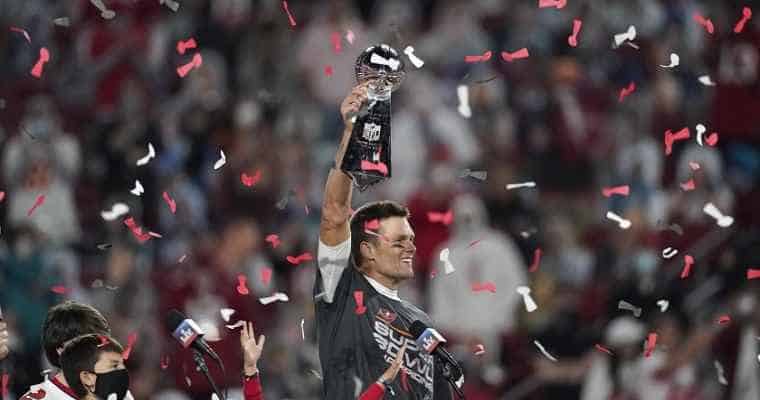 The Kansas City Chiefs were unable to repeat as NFL champions as they fell last night to the Tampa Bay Buccaneers in Super Bowl 55 by a final score of 31-9.

The oddsmakers at Super Bowl sportsbooks have had a tough run setting the lines for Tampa Bay over their last three postseason games.

In each of those three games, Tampa was behind in the point spread by at least a field goal but still managed to win the game. It can be difficult to set betting odds based on the championship determination of a 43-year-old quarterback, but bookmakers had ample evidence to factor that in when making projections for a team helmed by Tom Brady.

It is hard to fault NFL betting sites for placing doubt on Brady’s potential considering what they were up against. They played all three of their 2020-21 NFL Playoff games on the road, with the final two at the New Orleans Saints and Green Bay Packers.

Injuries and the reports that go along with them are always considered when setting pro football betting odds, so it is strange that Kansas City remained a 3.5 point favorite when their two starting offensive tackles had been declared out for the game.

Kansas City quarterback Patrick Mahomes was running for his life during Super Bowl 55, as his pass protection often broke down, leaving him with limited time to make a decision. This was largely a result of an inexperienced offensive line for Kansas City, and bettors that risked money on Tampa Bay’s point spread or money line odds are very happy right now.

The $3.48 million bet mentioned above was laid by Mattress Mack (Jim McIngvale), a bed store owner that ran a promotion that promised a free bed to all customers who bought a mattress recently. He took the proceeds and bet it on the Buccaneers. and after last night’s game, his customers are sleeping well and dreaming about that refund check.

The over-under for Super Bowl LV had been set at 56.5, allowing for bets to be placed on whether or not both KC and TB would combine to score over or under that amount.

Someone cashed in big by betting $205,000 on the under, earning a cool $180K. Both teams feature explosive offenses that can put points on the board on any given play, so it was expected to be a high scoring affair that had the potential to be decided by the final drive of the game.

That said, betting the under on Super Bowl 55 was incredibly risky, and to the winner, we here at Legal Betting Online congratulate you on your victory.

Meanwhile, the only prominent NFL bet type that will involve game action that can be wagered on over the next few months are the Super Bowl 56 futures that are debuting today at sportsbooks around the world.

Kansas City and Tampa Bay are featured atop the odds as the AFC and NFC’s most likely representatives in Super Bowl LVI, with KC leading the pack at +500. Even though the Chiefs lost SB 55, they’ve had the lowest NFL championship futures odds for nearly two years consecutively at this point, and that trend looks to continue on into the 2021-22 NFL season.

If you are interested in earning payouts that are exponentially higher than the amount risked, we suggest getting in on these SB futures odds now because even the most likely winner can earn 5x the total wagered.

The only downside is that these NFL futures betting lines will take a year before any money can be collected, but that is why the odds are so profitable and should be taken advantage of now. The Tampa Bay Buccaneers currently feature +900 odds at Bovada to repeat as champions, which can award $9 for each $1 wagered if bettors act now.