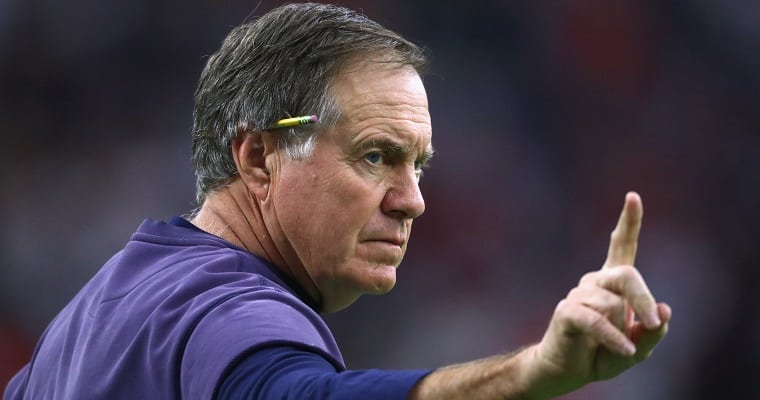 It’s Friday of Super Bowl week and bettors are now honing in on the odds that intrigue them the most. With that in mind, we’ve decided to offer up our top five prop bets for Super Bowl 55 that not only make for interesting odds, but also reveal information about the drama leading up to Sunday night’s championship matchup.

Bovada Online Sportsbook has posted their usual glut of Super Bowl prop bets, but the following lines fall outside the norm and offer a glimpse into what viewers can expect to see during this particular year’s broadcast.

How Many times will Bill Belichick be mentioned?

New England Patriots head coach Bill Belichick has won more Super Bowls than anyone else, but all of them were captured while his starting quarterback was Tom Brady. This year marks Brady’s first year playing outside of New England, and he’s already led the Tampa Bay Buccaneers to Super Bowl LV.

Because of this oddball relationship between Brady and his former head coach, announcers and analysts will not be able to resist talking about Belichick and how his legacy will be affected if Tampa Bay can win Super Bowl 55.

If Tom Brady’s team wins on Sunday night, it’ll be his 7th Lombardi, which will grant him one more than his former head coach and will prove to his critics that all of those years of success with the Patriots had more to do with his skill as a QB than it had to do with Belichick’s play calling.

The above prop bet excludes the halftime show and all commercial breaks, so don’t rush to collect your winnings when you see Belichick on an ad for Subway.

Super Bowl MVP prop bets typically offer dozens of players to choose from on both rosters, placing money line odds next to their names that indicate their chances of becoming the most valuable player of the game.

This prop eliminates all of the extra players and allows bettors to lay action on the SB LV MVP trophy being awarded to either quarterback. QBs win the MVP of the Super Bowl over 50% of the time, so bets on Mahomes and Brady to earn the honors requires risking $5 to earn $1 because of the -500 odds.

What Will Be Mentioned First?

When you’ve been around as long and have accomplished as much as Tom Brady has, you can’t help but pile on the years to go along with the SB titles. Because of his longevity and success, his advanced age of 43 and his 10th appearance in a Super Bowl will certainly be mentioned by those in the broadcast booth. Age typically comes before beauty, but not in this case as his tenth SB appearance is predicted to be mentioned first.

Will Either Kicker Hit The Upright Or Crossbar On A Missed Field Goal Or Extra Point?

There have been an extraordinary amount of field goals and extra points that have hit the crossbar during this season’s NFL Playoffs. A main culprit in the uptick is likely due to extra-point attempts now requiring a 35-yard field goal instead of 20-yards like it used to be, but that rule has been changed for years now.

Bets on yes can be profitable to the tune of 2.9x the amount wagered.

Will The Super Bowl Not Be Played Or Not Be Completed On Feb 7th?

To round out our favorite prop bets for this year’s Super Bowl, Bovada is producing several lines that have been inspired by their prop builder submissions. They’ve got them all compiled under a #Whatsyawager header on their website.

Several betting options are available like the line above, with many featuring 2 or 3-tiered prop bet parlays with astronomically profitable money line odds.  Sadly, the above odds on the cancelation of Super Bowl LV are not unlikely enough, and represent a realistic chance of the game being delayed or not played at all.

Hopefully, the above Super Bowl betting odds do not cash in and COVID-19 doesn’t cause any issues this Sunday. Here’s hoping for a good, competitive game and that the NFL can successfully get the 2020-21 season in the books.