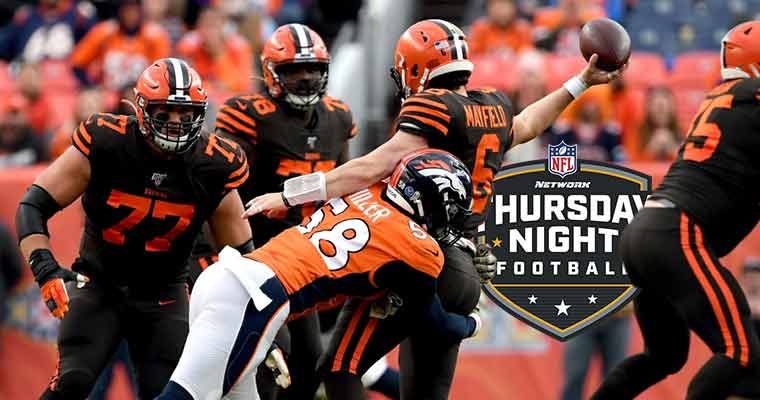 The Denver Broncos started the 2021-22 NFL Season with a promising 3-0 record, but have suffered losses in three consecutive weeks to the Baltimore Ravens, Pittsburgh Steelers, and Las Vegas Raiders.

Now the Broncos are looking for answers as a franchise, and what better opportunity than on Thursday Night Football against a Cleveland Browns team who will be missing several key starters due to injury.

Out For Tonight’s Game

Despite a large portion of the Browns offense threatening to miss tonight’s edition of TNF, odds posted at NFL sports betting sites are still predicting a close game with a -1.5 point spread favoring Cleveland.

We mentioned three well-regarded NFL teams when recounting the last three weeks of play for Denver, but get a load of their first three opponents – The New York Giants, Jacksonville Jaguars, and New York Jets.

A victory over the three aforementioned teams would be significant only in determining whether your team was currently in the league cellar, and would not be an indicator of Super Bowl potential.

Regardless, NFL writers seemed to bite on the notion that Denver is on the upswing, but tonight’s NFL point spread reveals the dire straights that the franchise is currently wading in.

What about the Cleveland Browns? Last season they actually advanced in the NFL Playoffs, blowing a choice opportunity to knock off the Kansas City Chiefs in the Division Round.

Once again, the Browns are the sexy pick by sportscasters and prognosticators, but NFL oddsmakers are wise to their act and are not fooled by their roster of studs that cannot seem to put a complete season, much less a complete game, together.

Cleveland is also 3-3 and tied for last place in the AFC North. It seems that the time is now for the Cincinnati Bengals with second-year QB Joe Burrow once again at full health.

Burrow seems to have already elevated his Bengals beyond the Browns, and we’ll find out for sure on November 7th when the two of them go head-to-head.

A win tonight for Cleveland will pull the nose up on the 2021-22 season, and their NFL Playoff odds still place them among the top 9 franchises competing for Super Bowl 56. However, those odds will certainly sour with a loss to Denver.

The Broncos are currently the 20th overall rated team in the odds to reach Super Bowl LVI, placing them in the bottom half of the league and three spots out of the playoffs.

Denver isn’t going to win the AFC West, that much can be assumed. With only three wild card spots, it is hard to envision a scenario where the Broncos qualify for the playoffs, but they can begin proving their might tonight against the Browns and perhaps snatch postseason honors from their grasp.