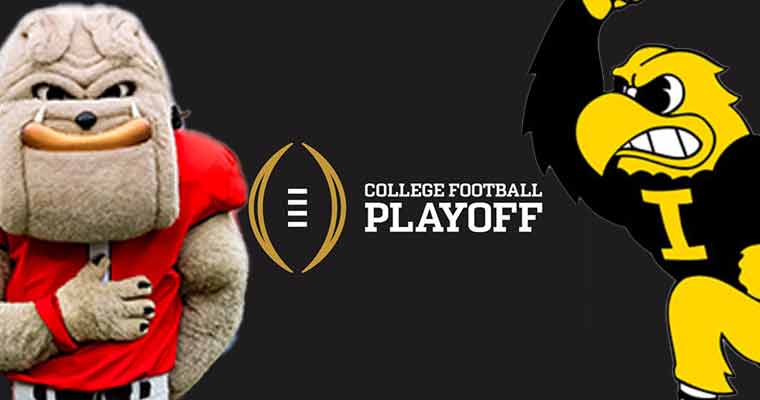 The Iowa Hawkeyes let one get away from them last Saturday as the Purdue Boilermakers bested them by a score of 24-7. Although the loss dropped the Hawkeyes from number 3 to 7 in the overall rankings, College Football betting sites still consider them a player for the CFP as their NCAAF National Championship odds place them 8th overall.

That’s because Iowa’s remaining schedule grants them a legitimate shot at winning the Big Ten West and qualifying for the championship game against what many assume will be the Ohio State Buckeyes.

A Big Ten Division Championship should be enough to warrant the Hawkeyes a top-four spot in the 2021-22 College Football Playoffs, and the same can be said for any other program that can claim those honors so long as they have one or fewer losses entering the NCAAF postseason.

Below are the top handful of NCAAF teams in the odds posted for betting on the College Football National Champion, and it can be assumed that numbers one through four will be the final four qualifiers.

Of the top 8 teams featured above, only 5 of them are undefeated. The Michigan Wolverines and Michigan State Spartans, although sporting perfect records, are not getting any respect from pollsters or the bookies.

That’s because neither of them has played each other, or Ohio State, so there’s a lot to settle over the final weeks of the season before a Big Ten East winner is decided.

Once all the dust has cleared, College Football Playoff sportsbooks believe that Ohio State will win the Big Ten and claim a spot in the NCAAF postseason, leaving Michigan, Michigan State, and Iowa left seeking solace at a major bowl game.

The Georgia Bulldogs are expected to move on and win the SEC Championship Game, and unless the Alabama Crimson Tide suffers another loss and allows Texas A&M a shot at the title through a crease in the back door, they’ll be the assumed representative of the West Division.

If the Bulldogs lose the SEC Title Game, odds are they’ll still claim a CFP seed, soaking up 50% of the bracket alongside Alabama. If that ends up being the case, who would that leave out?

Judging by the CFP odds above, no one, save for the Cincinnati Bearcats whose only quality win is against the Penn State Nittany Lions, will have a legitimate beef regarding an exclusion.

For the record, if the above projections prove accurate, two spots would go to the SEC winner and runner-up, one spot would be granted to the winner of the Big Ten, and the last would be given to the Oklahoma Sooners if they can win the Big 12 without losing a game.

Cincinnati fans should be rooting for the Sooners to lose a game prior to the College Football Playoffs Selection Committee rendering their choices. Elsewise, they’ll need Georgia to win the SEC Championship Game, adding a second loss to Alabama’s record.