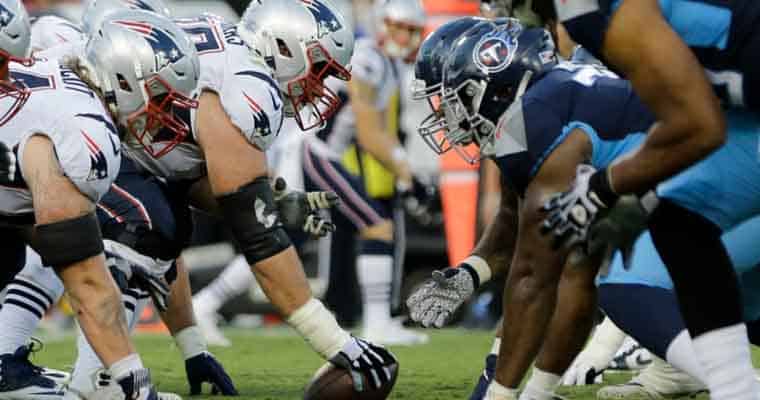 Now that yesterday’s three Thanksgiving NFL games are in the books, focus can be shifted to contests that are more intriguing from a betting perspective, as well as in regard to postseason seeding for the playoffs.

Of the 12 games remaining on this week’s docket, the largest NFL point spread is granted to the New England Patriots who will be hosting the Tennessee Titans this Sunday at 1:oo PM Eastern.

Our staff has been high on the Tennessee Titans this season, although they’ve suffered some incredibly questionable losses to the New York Jets and the Houston Texans thus far.

On the other side of the coin, Tennessee has secured victories against some of the league’s best teams, including two wins against the surging Indianapolis Colts, while also besting the Arizona Cardinals, Kansas City Chiefs, Buffalo Bills, and the Los Angeles Rams – all top teams expected to make the playoffs.

Considering how well the Titans have played in 2021-22, why are NFL betting sites predicting them to lose by a touchdown to the New England Patriots?

The absence of the NFL’s best running back from the Titans’ offensive backfield is a major factor in why oddsmakers are not confident in Tennessee being able to hang with New England for 60 minutes of professional football.

Derrick Henry has been out with injury since October 31, and the Titans have gone 2-1 over that time with wins against the Rams and New Orleans Saints, and a loss to the Texans.

Henry is expected to return to health by Week 14, but with the Titans’ playoff seeding likely locked up due to their two-game sweep of the Colts, he may be allowed to rest for longer than that.

Either way, Henry will not suit up on Sunday as Tennessee tries to get back to their winning ways against the favored Patriots and rookie quarterback Mac Jones out of the University of Alabama.

New England has destroyed their last three opponents with their defense allowing no more than a touchdown during that span. With the Titans struggling to move the ball without Henry, oddsmakers at online NFL Playoff sportsbooks believe that both trends will continue into Sunday’s game.

If the Patriots can indeed handle the Titans and defeat them by a touchdown or more, the NFL Playoff picture will alter in New England’s favor, likely placing them in front of the Bills and favoring an outcome where they clash with the Chiefs in the Divisional Round or after this postseason.

For those that are not so certain about the outcome of Sunday’s battle of AFC powerhouses, perhaps the following NFL prop bet should be considered.

If the Patriots do not place any points on the scoreboard during the first 15-minute interval, wagers placed on that outcome can net 5x the amount risked. This represents one of the hundreds of prop bets for the Patriots and Titans currently offered online, but they will be removed before kickoff so consider laying some action now.