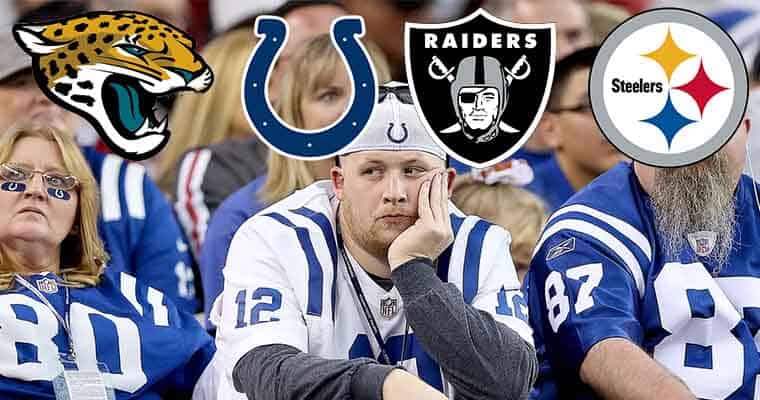 Week 9 in the National Football League began last night when the Philadelphia Eagles continued their dominance by beating the Houston Texans by a final score of 29-17.

With a record of 1-6-1, the Texans can no longer cling to any postseason hopes. The same fate is in store for the Pittsburgh Steelers, Indianapolis Colts, Las Vegas Raiders, and Jacksonville Jaguars if they lose another game or two.

While these four aforementioned AFC franchises are by no means about to be eliminated from postseason contention, legal NFL betting sites have weighed in and are already counting them out of the playoffs.

The first game of interest begins at 1:00 PM on November 12th, with the visiting New Orleans Saints favored to beat the Steelers at Heinz Field by a margin of -2.5.

Keep in mind that not only is New Orleans a road favorite, but they’ve just found out that their star wide receiver, Michael Thomas, will miss the remainder of the season.

Combining the point spread and the NFL over/under above suggests that the final score will be New Orleans 22, Pittsburgh 19. If those odds prove accurate, the Steelers will find themselves holding a win-loss record of 2-7

Also at 1:00 PM on the 17th, the Kansas City Chiefs are positioned to annihilate the Jaguars in Arrowhead Stadium.

The sneaky Jacksonville defense will have their hands full when they face Patrick Mahomes and the juggernaut Chiefs offensive unit. The Jaguars have surprised opponents this season with a stout defensive effort, but those anomalies have not resulted in wins.

We must warn readers that large spreads like these in the NFL are rare and are difficult for teams to cover. As an example, the Eagles were favored by 13.5 last night against the Texans but only managed to win by 12.

With that in mind, don’t overvalue the Chiefs and consider betting on the Jaguars to cover.

The visiting Colts are underdogs by a margin of just over a field goal, and that’s largely due to a change at quarterback and their stud running back being injured.

Indianapolis began the season with veteran Matt Ryan under center, but the experiment has been a failure, resulting in the insertion of Sam Ehlinger into the lineup.

Ehlinger lead the Colts to a 17-16 loss to the Washington Commanders, followed by an embarrassing defeat at the hands of the Patriots last weekend, but are NFL oddsmakers being too harsh in regard to their chances of beating the lowly Raiders?

We think so and expect the Colts to cover against Las Vegas. A wager placed on Indianapolis’ +160 NFL moneyline odds will reward gamblers with $1.60 in gains per dollar risked.