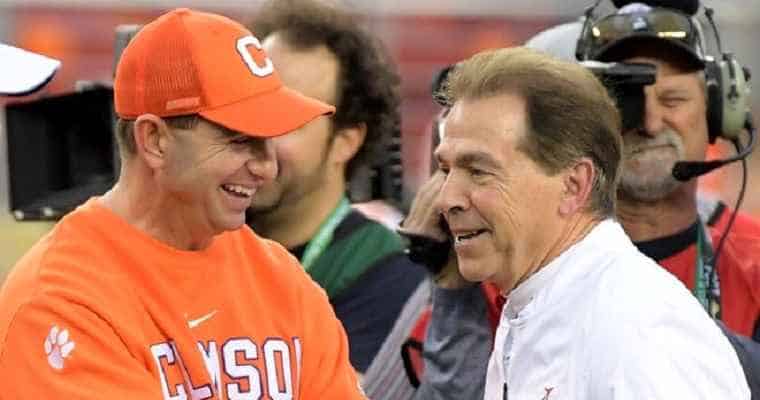 New Year’s Day causes many to wake up later than usual following an evening of celebrating, watching the ball drop in Times Square, and taking in libations such as champagne.

Sleeping in typically aligns perfectly with the January 1 CFP betting because the bowl games don’t begin until noon or later.

The Cotton Bowl is behind us, but today and tomorrow’s New Year’s Six Bowl games will be filling national television broadcast schedules and are sure to keep folks interested in college football betting busy for the next 48 hours.

These six bowl games include the two College Football Playoff matchups, with the two destinations rotating to different bowl locations each year.

This year’s CFP games will be played in Pasadena, California’s Rose Bowl, and New Orleans, Louisiana’s Sugar Bowl in the Mercedes Benz Superdome. We’ve gathered the top College Football Playoff odds and New Year’s Six Bowl betting lines below to get you ready for all the NCAAF action.

The above college football betting lines from Bovada Sportsbook imply an easy win for the Alabama Crimson Tide over the Notre Dame Fighting Irish, and a victory by more than a touchdown for the Clemson Tigers over the Ohio State Buckeyes.

If the above CFP odds are accurate, then NCAAF fans will be treated to a National Championship Game pitting Clemson vs. Alabama, inarguably the two most dominant programs in college football over the past several years.

The NCAAF National Championship odds favor the Crimson Tide over the Tigers by a significant margin and they are the only team with a negative money line.

Notre Dame didn’t even win the ACC, which begs the question, why wasn’t a team from a different Power 5 Conference considered for the CFP final four?

The Irish and their +2200 NCAAF National Championship futures odds will earn $2,200 for every $100 bet on them, so if you’re feeling lucky, lay a little action on Notre Dame and let it ride.

We do mean a little, because all signs point to them getting trounced by Alabama in the Rose Bowl, but laying $2 on them to win it all has a chance to earn $44.

Below are the NCAAF betting lines for the remaining New Year’s Six Bowl Games.