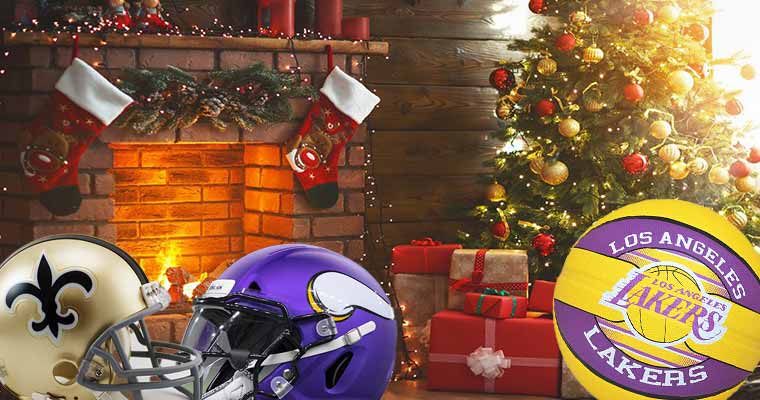 Christmas morning brings with it the expectation of visiting with family, giving and receiving gifts from friends and loved ones, and with a little luck, some holiday magic inspired by the participation of everyone’s belief in the holiday spirit.

Americans can also expect that the National Basketball Association will broadcast several marquee games on Christmas Day, and once again, they’ve delivered.

The 2020 NBA Christmas schedule has been rolled out by the league, and we hope you’re not busy for the next 12 hours, because your afternoon, evening, and night are covered with NBA betting odds.

Tuesday night marked the beginning of the 2021 NBA season which is coming on the heels of the completion of the 2020 Finals. The Los Angeles Lakers dropped their opening night game, losing to their crosstown rivals, the LA Clippers.

Now, the Christmas Day NBA odds suggest that LeBron James and the Lakers will win by 6 today against a Denver Nuggets team that made it to the Western Conference Semifinals last season.

Second-year pro Zion Williams will be featured in the opening game of the day at noon. Williams and the New Orleans Pelicans are 5-point underdogs to the Miami Heat but don’t be surprised to see Zion perform well on a national stage and lift the Big Easy to a Christmas Day victory.

The Brooklyn Nets and co-owner Jay-Z were anxious to get back onto the court as last season’s campaign was more of a preparatory year due to stars Kevin Durant and Kyrie Irving recovering from injury.

The Nets looked strong in their opening night victory against the Washington Wizards, but that wasn’t enough to convince the NBA betting sites to favor them over the Boston Celtics, as they are currently 1.5-point Xmas day dogs.

NFL Christmas games happen from time to time, but not every season. The last time there were NFL games on Christmas Day was in 2017 which fell on a Monday.

Friday isn’t the most traditional day of the week for NFL Football, but it’ll do, because these NFL betting odds imply a competitive matchup between the New Orleans Saints and the Minnesota Vikings, and the results of this game will impact both team’s playoff chances.

While Bovada Sportsbook feels fairly confident that the Saints will win by a touchdown, we’re laying off of this one. The Vikings are hard to peg. They’ve got talented players on all sides of the ball, but seem to fall apart every other game.

It seems like an easy prediction to suggest that the Saints should be able to handle the Vikings now that Drew Brees has returned from his broken ribs injury and is under center once again, but when Minnesota is hot, they can beat anyone.

Perhaps it might be more profitable to browse the NFL prop bets available for this Christmas Day football game, or to lay some action on the over/under.

Regardless of which direction you go, both the NBA and the NFL’s Christmas Day schedule should fill you, and your sportsbook bankrolls, with holiday cheer for the entire evening. Ho, ho, ho!