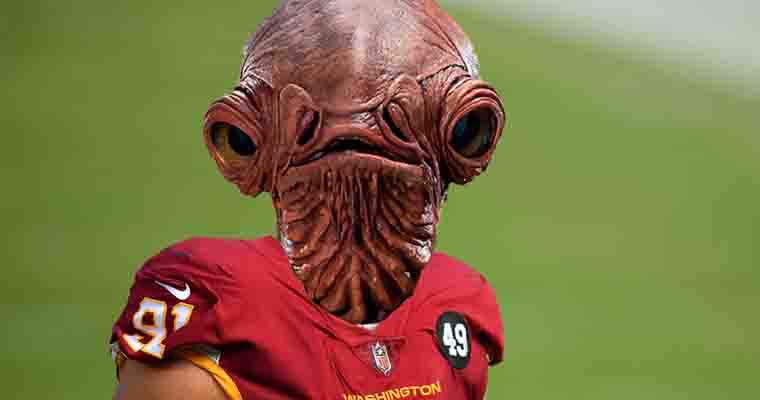 After spending two full seasons as the Washington Football Team, the NFL’s D.C.-based franchise appears to be closing in on a new name and mascot.

On February 2, just 11 days prior to Super Bowl 56, Washington will reveal their new moniker, and NFL betting sites are now offering the following prop bet which indicates that they’ll most likely become the Admirals.

The Commanders appear to be the only other contender within reason, as the top two are firmly separated from the rest of the pack, but the Admirals still hold a “commanding” lead of 550 points in the moneyline odds.

Why are NFL oddsmakers so confident that Dan Snyder will opt to become the Admirals over other worthy choices such as the RedHogs and the Presidents that are on the table.

One element that may be tipping the hands of the line setters for NFL prop bets is the fact that WashingtonAdmirals.com was recently re-directing to the official Washington Football Team website, but that could all be a smokescreen set up by eager fans with too much time on their hands.

There’s more to the renaming of an NFL franchise than just switching out the company letterhead. This adjustment will require an across-the-board alteration that’ll include logos, uniform design, and marketing tie-in potential.

Ease of transition is also a consideration. With that in mind, perhaps that could be used as rationale for selecting a name that begins with R so that they can simply return to the helmet style used while they were the Redskins.

The RedHogs and Redtails are the top two names on the board that begin with r, with both betting options coming along with moneylines that’ll deliver solid payouts if correct picks are made.

Gamblers have just under a month to make their wagers, but the -350 NFL moneyline odds on the Admirals intrinsically converts to a 78% of it occurring. That’s a near certainty in the realm of sports betting, and books will require wagers of $3.50 just to net a dollar if the Washington Admirals becomes a reality.

While the RedHogs may seem like an oddball name for a team, it fits well for Washington. The “Red” prefix contains enough of a reference to their former identity to satisfy fans looking for some sort of callback.

The “Hogs” suffix is a nickname used for Washington’s offensive line that dates back to their championship days in the 1980s, proving a solid match to be paired with Red and also keeping the new mascot in-house and not adding another element to their already rich history.

Another bizarre sidebar to all of this renaming madness is that Ron Rivera will be the only coach to ever command the sidelines of the Washington Football Team.

Members of Washington’s roster for the last two years can boast random histical statistical achievements that actually hold water. “I hold the record for the most punts in a game for the Washington Football Team, and it’ll never be broken!”