Skip to content
HomeNewsAlabama vs. Georgia Odds Pull Close To Even For CFP Championship Game Betting 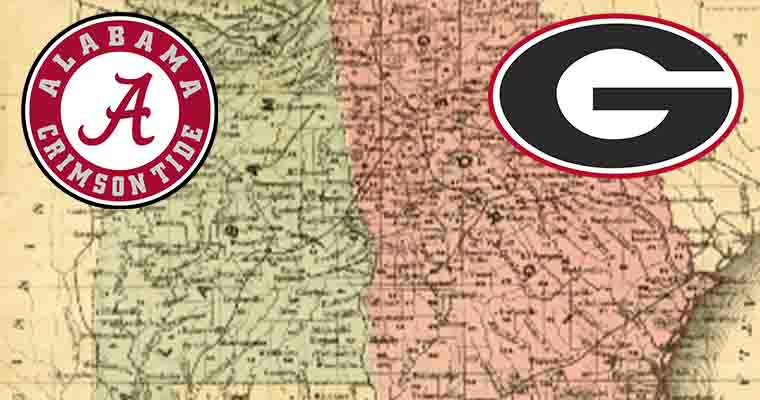 When a football betting line features a point spread that is three or under, it implies that either team can win. Oddsmakers attempt to include all potential scenarios when crafting betting lines for each game, and they are often incredibly accurate when compared to the actual results over the course of history.

Because College Football Playoff Championship Game betting is focused on a single contest, the CFP odds face more scrutiny from the public than a regular-season affair.

Online sportsbooks are aware that the Georgia Bulldogs lost to the Alabama Crimson Tide in the SEC Championship Game on December 4th. They are also well-informed of the fact that the Bulldogs allowed 41 points to the Tide, while only placing 24 on the board themselves.

Could it be the change of venue that has NCAAF betting sites convinced that Georgia is in line for a rebound performance just five weeks after getting worked by Alabama?

Both the SEC Title and the CFP National Championship will be played in an indoor arena on artificial turf, so the elements will be identical. Perhaps there is something to removing the game from the Southeastern United States and placing it in the midwest.

Online CFP sportsbooks could be leaning toward experience as the deciding factor as to why they believe UGA will perform differently this time around.

Now that Kirby Smart and the Bulldogs have experienced 60 minutes of competition against Alabama, are they more prepared to face them competitively?

Consider this – Smart is a disciple of Alabama head coach Nick Saban, serving as his defensive coordinator and leaving the Tide for UGA 2015. While learning from the best-of-the-best is never a bad thing, Saban’s former associates have not had much luck against him – ever.

The first time one of Saban’s former assistants got the better of him was earlier this season when his Crimson Tide lost to the Texas A&M Aggies coached by Jimbo Fisher.

Are college football betting sites really suggesting that lightning will strike twice in the same season against a coach the likes of Nick Saban?

That does indeed appear to be the case as no matter what the prior result was, and regardless of what history suggests, the Georgia Bulldogs are still 2-point favorites tonight against Alabama.

If you believe that suggestion is ludicrous, and a lot of folks do, lay some action on your anticipated result right now and earn a little extra spending cash.

Options are on the table for either betting on Alabama to cover the 2.5 points, or wagers can be placed on the Crimson Tide to win outright at +115.

Bets of $1 on Alabama to win the 2021-22 CFP National Championship will net wins of $1.15 which is incredibly attractive considering it is a wager on a program going for back-to-back titles against an opponent that they’ve already beaten.

Nick Saban has won more college football national championships than any other coach in the history of the game, and tonight he is attempting to extend his record by hoisting a seventh CFP trophy.

Whether you are caught up in the Georgia hype or not, be sure to submit your wagers in advance of tonight’s 8 PM kickoff to secure the best pregame CFP odds that’ll deliver the most profit potential.