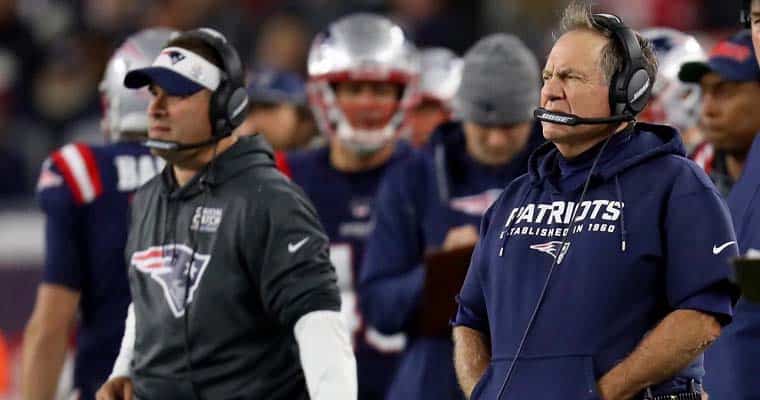 Everyone knew before the season started that the New England Patriots were going to be a force to be reckoned with yet again.

After winning the 6th title last season, Bill Belichick and Tom Brady’s bunch began their quest for a 7th Super Bowl ring as the favorites and were listed at +700 odds at Bovada Sportsbook for the start of the 2019 NFL season.

With the best odds to win Super Bowl 54, the Bovada oddsmakers were giving the Pats a 12.50% chance to win it all again and claim a record 7th Lombardi Trophy for the franchise.

Today—after playing only six games—the Patriots have essentially doubled their chances of winning Super Bowl 54 since the start of the 2019 season and are listed at +300 odds, which gives coach Belichick’s squad a 25% chance to win in February next year.

Last night’s Thursday Night Football 35-14 victory against the New York Giants was just the latest example of the Patriots’ dominance so far this season.

Here’s a look at how the Patriots have performed so far, including the mauling that took place yesterday evening in New England.

Only the Bills gave the team a run for their money two weeks ago in Buffalo, but regardless, the Patriots are a perfect 6-0 and show no signs of slowing down.

Brady hasn’t needed to win many games for the time, and the drama saga with embroiled wide receiver Antonio Brown—who was cut after 11 days and suiting up for a single game—is a thing of the past.

Belichick is arguably the greatest mind the game of football has ever seen, and while he’s no doubt revolutionized how offense is played in the NFL, some may argue there are better offensive play-callers.

While that point is debatable, no one can question that Belichick’s defensive schemes and play-calling aren’t the best the NFL—or any level of football—has ever seen.

And this season, Belichick has taken this defense to an entirely different level. After six games, here’s where the Patriots defense rank in each statistical category.

As you can see, the Patriots defense ranks 1st in the NFL for nearly every single defensive statistical category so far this season.

But knowing Belichick, he’s probably furious that his unit is only 3rd in rush defense and ranks in the bottom third of the league in recovering fumbles.

One of the best NFL bets you could make over the past two decades is the Patriots winning the AFC East division, the AFC, and even the Super Bowl—and this season appears to be no different.

While there’s plenty of football left in the 2019 NFL season, the odds of any team taking down the Pats are slim, to say the least.

And with how historical good Belichick’s defense has been this season, the odds may very well be none.