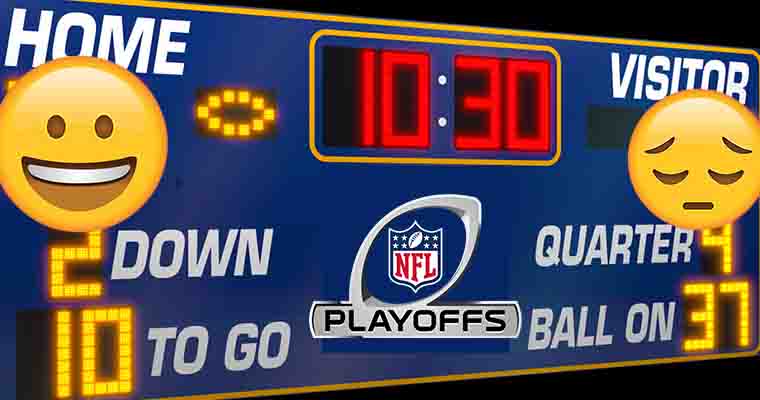 The NFL has done a great job with their 14-team playoff format that not only grants pro football fans a 6-game Super Wild Card Weekend, but also includes a postseason edition of Monday Night Football.

Gamblers are now flocking to online NFL Playoffs betting sites to lay some action on the latest game lines, props, and updated Super Bowl 56 futures in advance of the league producing another 4-game showcase of their top franchises.

The stakes are the same for all teams involved – win the next three games and become Super Bowl LVI champions.

One of these final 8 teams will do it, but which one is favored? Have a look at the latest futures odds posted at Super Bowl betting sites for the teams ranked 1 through 8.

What’s interesting about the above NFL futures is that the third overall team listed is the Buffalo Bills. Unfortunately for them, they face the 2nd rated Kansas City Chiefs this weekend who are favored to win by 2.5 points at home.

That is the closest NFL point spread of the weekend, whereas the widest gap of 6 is granted to the Green Bay Packers who are expected to defend their home turf against the San Francisco 49ers.

NFL game lines for the Cincinnati Bengals at Tennessee Titans and the Los Angeles Rams at Tampa Bay Buccaneers both favor the home team by a field goal.

To add intrigue to the weekend, there are several NFL prop bets on the boards that include all four games in on the action. For example, here is a pro football prop asking which NFL Playoff game will be the highest scoring.

KC and the Bills are poised for a shootout and are well ahead of all three other games this weekend with a 275 point separation in the moneyline odds from second place.

Buffalo embarrassed the New England Patriots last weekend by a final score of 47-17 and would like nothing more than to spoil the Super Bowl hopes of the Chiefs and get revenge for their loss in the 2020-21 AFC Championship Game.

The Buccaneers and the Rams are also in the top five overall SB 56 futures. Will the up-and-coming Rams supplant last year’s champions or does Tom Brady have another trick up his sleeve at 44 years of age?

There’s another NFL prop bet on the boards that suggests Brady will have the second-most passing yards against the Rams, coming in just behind Patrick Mahomes of the Chiefs.

NFL Odds For Most Passing Yards – Divisional Round

As long as the correct quarterback is selected, at least two-to-one net payouts can be earned, even if you bet on Mahomes! Good luck this weekend and check back with us for our NFC and AFC Championship betting previews next week.