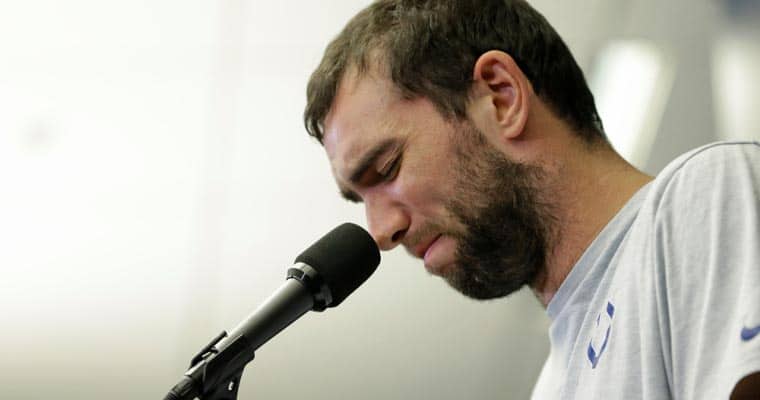 In a move no one saw coming, Indianapolis Colts starting quarterback Andrew Luck announced his retirement from the NFL Saturday night following the team’s preseason loss to the Chicago Bears.

Luck did not suit up due to injuries—which he stated had “taken the joy” out of playing football—for the game but was on the sidelines when the news leaked.

Coming into the 2019 NFL regular season, the Colts, when they had their 4-time Pro Bowler and former 2020 No.1 overall pick under center, were considered by online sportsbooks to one of the strongest teams this year.

However, that all changed when news broke of his retirement, and oddsmakers in the legal US and international markets quickly pulled down all of the odds for the Colts.

Before 29-year-old star quarterback’s retirement from professional football was made public, at BetOnline, the Colts odds to win Super Bowl 54 sat at +1600 or 16-1 ($1 bet would win $16) and inside the top 10—some online sportsbooks even had the team’s odds to lift the Lombardi Trophy inside the top 5.

After the announcement, the BetOnline oddsmakers set the Colts, who will be starting back up quarterback Jacoby Brissett for the season opener, Super Bowl odds at +5000, which puts their chances in the bottom third of the league.

But it wasn’t just the Colts Super Bowl chances that took a hit; all of the betting odds for the Colts fell hard.

With Luck, the Colts were the clear favorites to take the AFC South division title this season at -105 but have since fallen to dead last in the division at +450. The Houston Texans, who were +275 and in second place, are the new favorites at +185 odds.

At +800, the Colts were expected to be a contender to win the AFC conference championship, but those odds have since plummeted to +2500.

In addition, Luck has since been removed from the “Odds to win the 2019 NFL Most Valuable Player Award” board.

After winning the 2018 NFL Comeback Player of the Year last season—and having arguably his best NFL season—Luck was given the third-best chance to win the MVP award at +1200 odds, coming in behind 2018 MVP Chiefs quarterback Patrick Mahomes at +600 and Eagles quarterback Carson Wentz.

For the Colts season opener on the road against the Los Angeles Chargers in Week 1, the team was already a 3-point underdog, but the point spread has since moved away from the Luck-less Colts even more. The Chargers are now a 7-point favorite.

And online sportsbooks did more than simply adjust the team’s chances of success without their starting quarterback. Luck-related prop bets also began popping up shortly after his announcement.

BetOnline released three NFL prop specials, asking bettors will Luck play during the 2019 or 2020 regular season. “No” is heavily favored on both lines. Additionally, an over/under of 10.5 is listed for the total number of starts that Brissett, the Colts new starting quarterback, will make in 2019.

Lastly, Bovada put out odds on where Luck will play in during the next two years, listing the NFL, XFL, and “neither” as possible outcomes. And it should come as no surprise that “neither” is a massive favorite at -4000.

All of the adjusted odds mentioned throughout can be found at online sportsbooks, and below you can see the odds for the Luck props currently available.

Total Starts For Jacoby Brissett In 2019

Where Will Andrew Luck Play In The Next Two Years?